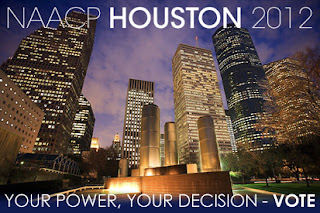 The 103rd Annual NAACP  Convention will be taking place in my hometown starting tomorrow through July 12.

It should be an interesting and in may cases start studded affair as our community's legacy civil rights org meets at the George R. Brown convention Center. with many of our local political leaders from Mayor Annise Parker to Congressmembers Al Green and Sheila Jackson Lee participating

Gospel singer Yolanda Adams, who is also a native Houston will be part of the long line of entertainers performing during the event as well that concludes on July 12.  And since this NAACP convention is occurring during a presidential election year, Mitt version 2012 will be speaking at it, so i can probably count on his saying something jacked up enough to get him a nomination for next week's Shut Up Fool awards.

So let's move on to earned this week's SUF award since it's Friday and I know that what y'all surfed over here to find out or left me nominations for.

In the group category it was the Republican party, Fox Noise, the TS separatists, the rad fems phlegms and the Texas Republican Party for their jacked up platform, The NRA, , the Washington Times, the Drudge Report and the Daily Caller.


Walsh's no serving ass had the nerve to part his lips and disparage Lt. Col Duckworth's 20 years of distinguished service to our nation and claim that a woman who lost two legs, the use of one arm as a helicopter pilot in Iraq, has a Purple heart and other military medals, still serves in the Illinois National Guard and served in the Obama Administration as the Deputy Secretary of the Veteran's Administration  isn't a hero.

Really?  In what conservafool alternate universe?   If Duckworth  had an 'R' behind her name you conservafools would be rubbing her in our faces and she'd be on Fox Noise and conservafool talk radio ad nauseum.

Walsh waited until Duckworth was doing her Illinois National Guard service to challenge her to a debate, and has continued to double and triple down on this reprehensible line of attack.   This chickenhawk who is $162,000 behind of his child support doesn't have the standing to part his lips and utter one word at Lt. Col Duckworth, much less President Obama