Yo Jennifer, Attractive Black Women Do Engage in 'Relationships Like That' 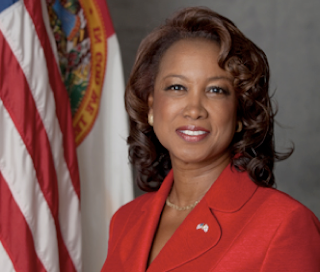 Had to say something about Florida Lt. Governor and conservafool Jennifer Carroll (R), who is embroiled in a Sunshine State sex scandal and made this jacked up comment.

"The problem is that when you have these accusations that come out, it's not just one person you're attacking. It's an entire family. My husband doesn't want to hear that. He knows the type of woman I am. I mean, my kids know the type of woman I am. For twenty-nine years - I'm the one that's married for twenty-nine years. The accuser is the one that's been single for a long time. So usually black women that look like me don't engage in relationships like that."

Oh really, Jennifer?   You don't get out much do you?   Guess you haven't heard of the term 'lipstick lesbian'.

I've been around the rainbow community since 1980, and I have seen, met and count as friends more than a few femme Black women with jaw-dropping beauty and Coke bottle shaped bodies capable of launching erections on any man or non-op lesbian transwoman, but prefer relationships with other women.

Women who look like you damned sure have engaged in 'relationships like that' for decades and will continue to do so whether your 49 year old clueless behind believes that or not.   Some of them have been in relationships far longer than your 29 year marriage.

You don't (or won't) know about Black women who engage in 'relationships like that' because as they so eloquently put it at times, it isn't anyone's business who shares their bed or who they choose to be intimate with.

Hmm, is she the first closeted female Republican that has been busted?   Stay tuned to how this scandal develops especially since Carroll is the lieutenant governor under the very unpopular Rick Scott and she's been used as a shield to deflect racism charges.

And yeah, you know she's in the running for this week's Shut Up Fool! Award
..
Posted by Monica Roberts at 3:30 PM