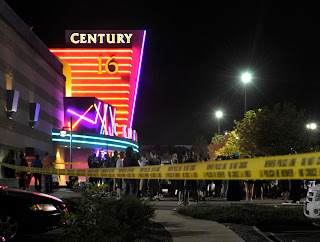 While I was preparing to get my learn on at the 2012 TTNS, some fool decided he'd use the lax gun laws to buy some weapons, multiple rounds of ammo and shoot up a movie theater in the early morning hours of July 20..

12 people are dead, including a six year old girl, 58 wounded because the NRA has stifled any rational discussion of gun control laws in the United States because of their racism, paranoid conservafool political stances and their overzealous interpretation of the Second Amendment.

Granted, the waste of DNA James Holmes is in jail now awaiting justice, but that's of little comfort to the families of the people he killed, the lives of others he disrupted, and the peace and tranquility of the lives of the citizens of Aurora, CO he shattered with this senseless act.

Society will also be denied the talents and potential contributions these persons could have made if their lives hadn't been violently cut short.

I can't stand the National Rifle Association because of their racism, vanillacentric privileged conservative political stances, and the rabid foaming at the mouth opposition to even the most minor common sense gun laws.   Wonder how they would feel if the gun violence was tearing apart their communities and affecting their loved ones?

But the NRA doesn't care about the entire country or any community that's affected by the gun violence, that's been obvious for decades.  They only care about a certain vanillacentric conservaslice of the electorate.  The NRA doesn't care about people who live in the urban communities who have had to deal with the consequences of the flood of guns their lax laws help enable in the name of 'protecting Second Amendment rights', especially if those folks don't look like them.

All that comes out of the mouth of NRA apologists is that tired bull feces spin line that 'if everyone in that theater (or fill in the blank area) had been armed, it would have stopped this shooting.' 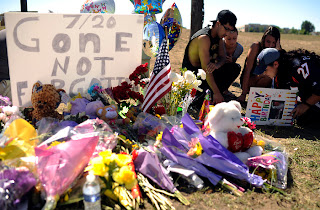 Yeah, right.  There were armed people at the Tuscon shooting and that didn't stop Jared Loughner.  Armed people wouldn't have stopped this fool either since he was wearing a bulletproof vest.  .

Every time one of these mass shootings happens (Columbine, Virginia Tech, Tucson) we hope this will finally be the tipping point event that starts a serious discussion about enacting serious gun control laws here only to fade away until the next mass shooting happens and we have the next one in which people are burying loved ones.

How many more people have to die, be wounded or crippled in the United States, Canada and Mexico before y'all stop tripping and allow some common sense gun laws in this country that ban assault weapons, extended magazine clips and people with mental health issues getting their hands on weapons that kill mass quantities of human beings?

I'm not holding my breath that the needed discussion will happen, especially with less than 120 days to go until an election day.
Posted by Monica Roberts at 10:00 PM

This is really helpful. I have read this and achieved a lot of information.