The Olympian I Know 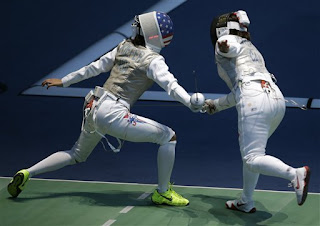 When I first started watching my then roommate pick up a sabre and start participating in various fencing tournaments inside the Kentucky Division and the Great Lakes Region, in the process of supporting my homegirl Dawn I got to meet some of the wonderful people who are part of US Fencing in that part of the world.

In addition to meeting the families, parents and friends of fencers, the 'Baby Vets' and the 'Senior Mama's, the gang at LFC, Maestro Stawicki, various officials and referees in US fencing, I also got to meet some of the up and coming US fencers when I was the announcer for the Super Youth Regional tourney that was held in Louisville in 2010. 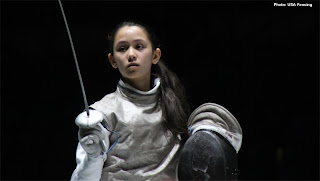 One of the fencing families I got to know during my time in Kentucky were the Kiefers.  Lee, her sister Alex and her baby brother are all foil fencers and pretty darned good ones.   Lee was already fencing on the international cadet level when I met them and their proud parents a few years ago.

When Dawn and I used to discuss Lee's tremendous talent or her  chances to be on or selected for a USA Olympic fencing team, we never used the word 'if' when discussing her, but 'when'

Dawn and I along with everyone else in the Kentucky Division expected her to be in London, and here she is competing at age 18 with a 2011 Pan Am Games gold medal and a raft of cadet and junior championship medals in hand.  She also has the distinction of being only the second American woman to ever earn a medal at the senior World Fencing Championships when she picked up a bronze last October. . 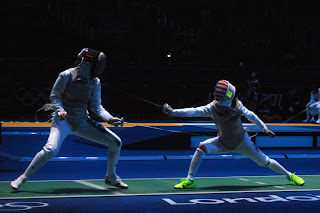 Lee made it to the quarterfinals of her first Olympic foil tournament before being ousted by the eventual silver medalist Arriana Errigo of Italy.   Lee is also a smart, super sweet person in addition to having serious fencing ability and talent.

I was up early to watch her match yesterday morning, and while I was sad she fell just short of the medal round, she made some fencing history in the process.  I have no doubts I will be seeing her again in Rio four years from now and she'll be standing on the medal platform when she competes in that 2016 tournament.

She still has the team foil event to go in a few days (August 2), so if things break her way, she may head back to Kentucky with a London Olympic medal after all.

Congrats Lee.  It's an honor to have a personal connection with an Olympic athlete and know firsthand the levels of hard work, determination and effort it took for you to be standing on that London Olympic strip.

I'm one more person who is immensely proud of you