Muppets Kick Chick-Fil-A To The Curb

The repercussions of Chick-Fil-A coming out of the closet as a rainbow oppressor continue.

The Jim Henson Company that has the copyright for the popular Muppet characters, have provided Muppet toys that have been included in Chick-Fil-A children's meals.

It announced via its Facebook page that it is severing its relationship with Chick-Fil-A specifically because of Dan Cathy's comments in the Baptist Press interview.  The even more delicious (pun intended) part of this story is that the check that Chick-Fil-A sent to the Henson company was forwarded as a donation to GLAAD. 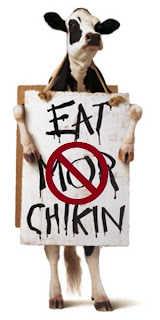 "The Jim Henson Company has celebrated and embraced diversity and inclusiveness for over 50 years and we have notified Chick-Fil-A that we do not wish to partner with them on any future endeavors. Lisa Henson, our CEO is personally a strong supporter of gay marriage and has directed us to donate the payment we received from Chick-Fil-A to GLAAD."

Bigotry doesn't pay Chick-Fil-A.   But then again you'll learn that lesson soon enough.
Posted by Monica Roberts at 2:00 AM