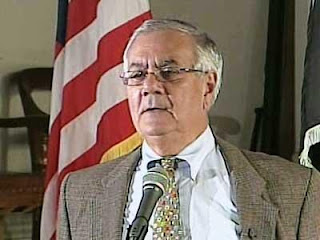 Next to me ripping the GOP on a regular basis here at TransGriot, the person who is next in line that I have frequently called out on more than a few occasions when he deserved it has been Rep. Barney Frank (D-MA)

I and many people in the trans community have cursed  'The Purple One' for our major differences in the speed of passage of federal human rights laws for transgender people that came to a head in October 2007 when he stripped us out of an ENDA bill that eventually got passed by the House but went nowhere in the Senate.

However, as much as I have chewed on 'the Purple One' in these electronic pages for being a legislative impediment for trans human rights issues, I also have to note that he also hired a transman on his staff 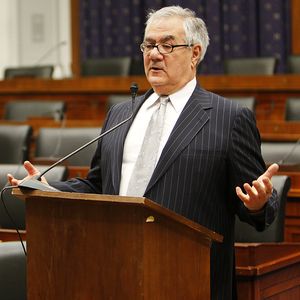 And differences in trans policy aside, The Purple One and I do have similar stances on a few liberal-progressive issues.

I also love the fact that Rep. Frank ain't scared to call out the conservafools for being the lying, informationally challenged doofuses they are on their own propaganda network.   That tell it like it T-I-S style also applied to constituents too.

So I was stunned to flip the TV on to MSNBC this morning right in the middle of his press conference announcing that he is retiring and will not be running for a 17th term in 2012.   Massachusetts lost a congressional seat in the latest round of redistricting and Frank noted it was a factor in his decision along with his desire not to be in politics past his 75th birthday.

He was the first congressmember to come out while in office, and rose to become a liberal icon and one of the more powerful Democrats on the Hill.   He has since been followed to Capitol Hill by Rep. Tammy Baldwin (D-WI) who is now running to become the first openly gay US senator and Rep. Jared Polis (D-CO).

President Obama had this to say about the retirement of Rep. Frank:

"This country has never had a Congressman like Barney Frank, and the House of Representatives will not be the same without him. For over 30 years, Barney has been a fierce advocate for the people of Massachusetts and Americans everywhere who needed a voice. He has worked tirelessly on behalf of families and businesses and helped make housing more affordable. He has stood up for the rights of LGBT Americans and fought to end discrimination against them. And it is only thanks to his leadership that we were able to pass the most sweeping financial reform in history designed to protect consumers and prevent the kind of excessive risk-taking that led to the financial crisis from ever happening again. Barney’s passion and his quick wit will be missed in the halls of Congress, and Michelle and I join the people of the Bay State in thanking him for his years of service."


When the 113th Congress cranks up for business on January 3, 2013, for the first time in 32 years Rep Barney Frank will not be in the House chambers as a part of it.