It's On Scott Walker: The Wisconsin Recall Effort Begins 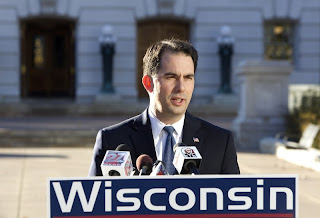 On November 15 the recall effort to unseat unpopular Wisconsin Governor Scott Walker commenced with the opponents of the GOP governor needing to gather 540,000 signatures by January 17 in order to trigger a recall election that would be scheduled for March 27 with enough valid signatures.

If there were a primary in either party, that election would be pushed back again to April 24.

In just 48 hours the Recall Scott Walker team has gathered 50,000 signatures and if they can sustain that rate they will have the required number of signatures in 11 days.    Their target is 600,000 so they have a cushion for any that are thrown out.

And for you TransGriot readers in Wisconsin, here's the link to the United Wisconsin page so you can do your part and join in on the fun.


Good luck and may you have much success in recalling and sending Scott Walker back to his life as a private citizen.