HISD Trustee Still On The Hotseat Over Homophobic Flyer 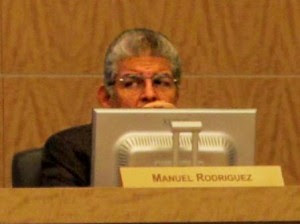 If HISD District III trustee Manuel Rodriguez thought the Thanksgiving holiday, a wacked phobic apology and the passage of time would lessen the anger of the Houston rainbow community and our allies over the homophobic campaign flier he unleashed during the final days of his contentious reelection campaign for his school board seat, um no.

A website called HISDbully.org and a Facebook page entitled Remove The HISD Bully have sprung up with the goal of getting Rodriguez to resign from the HISD board.  His opponent Ramiro Fonseca decided not to seek a recount in the race that Rodriguez won by 25 votes. 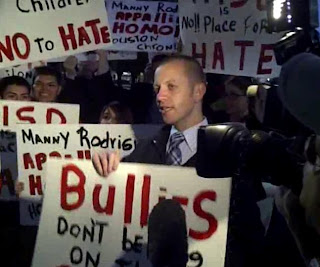 There is another community protest being planned for December 8, the next scheduled meeting date for the HISD board at the Hattie Mae White Educational Support Center.

That protest will start outside the building at 4:30 PM and in addition to the growing numbers of people asking for and signing petitions calling for Rodriguez's immediate resignation, there are increasing calls for making the just passed in August anti-bullying policies applicable to the HISD Board of Trustees.

Hmm..may have to be there that night for this one.