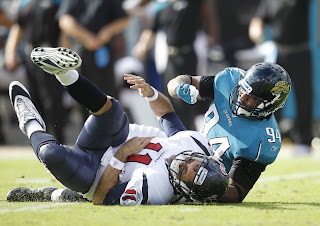 The AFC South division battle with the Jacksonville Jaguars was already going to be tough enough with Matt Schaub out for the season.

But moments after Leinart tossed his first TD pass as a starter since 2007 to TE Joel Dreesen that staked the Texans to a 17-7 lead he suffered a broken collarbone that will require season ending surgery. 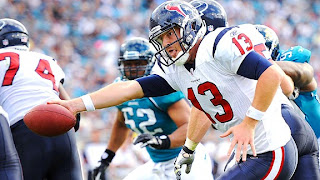 Off the bench comes rookie QB T.J.Yates to manage the game as the Texans went conservative in their play calling to ensure that Yates didn't get hurt and they would have to go to emergency quarterback Owen Daniels.

Thanks to the NFL's number one defense they held Jacksonville to 255 total yards of offense as the Texans sacked Jag quarterbacks seven times.

Connor Barwin did much of the damage by getting a team record four sacks and ensure they escaped EverBank Stadium surviving this latest bout of adversity.

The Texans defensive performance in this game helped carry them to a 20-13 victory, keep them unbeaten in the AFC South at 4-0 with division games left against Indy and the Traitors, extend their team record winning streak to five games and keep their hopes alive for home field advantage throughout the entire AFC side of the playoff bracket.

And we also witnessed Jack Del Rio's last game as the head coach of the Jaguars, who was fired this morning. He was already under a 'playoffs or else' ultimatum from Jacksonville Jaguars owner Wayne Weaver to keep his job, and the loss eliminated the Jags from playoff contention.   .

Speaking of playoffs, the question remains whether the Texans will have enough healthy players left to form a playoff roster when they get there much less a quarterback capable of taking them to a Super Bowl?

My favorite NFL ballers are  maintaining a two game lead in the AFC South with a 8-3 record.  But they'll definitely need a lot more than the 20 points they generated last Sunday.   T.J.Yates will get his first NFL start as the Texans face the Atlanta Falcons at Reliant Stadium this Sunday.

But if the defense keeps playing at this level, maybe not.