Back in May 2009 I wrote about Sorawee 'Jazz' Nattee becoming the latest person to wear the Miss Tiffany's crown and become Thailand's representative in the upcoming Miss International Queen Pageant that November.

Nattee ended up not placing in that Miss International Queen competition won by Ai Haruna of Japan but did finish third in the pre-pageant competition.

The interesting news that came out of the Land of Smiles ironically right about the time the Miss Tiffany pageant is held in Thailand is that the now 24 year old Nattee traded her crown for the orange robes of Buddhist monkhood.

Since only males can become Buddhist monks, that meant Nattee had to detransition to do so.

The international trans community has been hearing about disturbing cases in Thailand in which families who are majorly resistant to their trans children transitioning to live as women or their gay ones being forced to become monks.

According to Nattee, this isn't what's happening in his situation.  ‘It’s not that I’ve become a monk to run away from problems, but I’ve studied dhamma for two years and now know what it truly is.’’

Nattee also said in the Bangkok Post article he was doing so to repay his parents.

Genital surgery is optional for a contestant in the Miss Tiffany's and Miss International Queen competitions, and according to Nattee's family the only surgery Jazz had at the time of competition were breast implants.. 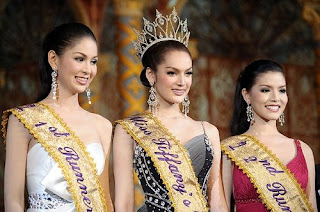 Nattee removed the implants and took the ordination name of Phra Maha Viriyo Bhikku as he entered a monastery in his home southern Songkla province. He didn't hide the fact that four years ago he was wearing the Miss Tiffany's pageant crown.

"I want to be a monk for the rest of my life and I’m ready to leave my worldly possessions behind,’’ Jazz said after becoming a monk at Wat Liab

I and everyone else in trans world hope that Nattee freely made this decision and wasn't pushed into it by his parents or other outside influences.   If it's what Jazz truly desires and made the conscious decision to do so, then best of luck in his life and spiritual journey.

But if he didn't, I definitely along with people in Thailand won't be surprised to see the return of Jazz