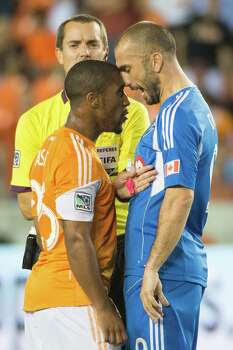 As has become the tradition for the two time MLS Eastern Conference champion Houston Dynamo the last few years, they tend to do just enough in the regular season to qualify for the MLS playoffs, then kick up their play another level and roll all the way to the MLS cup title game.

In this 2013 MLS season the Men In Orange were 4-1-2 down the stretch enroute to compiling their 14-11-9 record.  One of those down the stretch wins was a 1-0 one at BBVA Compass Stadium against their Eastern Conference knockout round opponent the Montreal Impact.

But there were still questions from pundits and fans alike about whether this 2013 edition if the Houston Dynamo had it in them or the talent to make it to their third consecutive MLS Cup title game.

They were also playing in the Impact a team that had beaten the Dynamo twice by the aggregate score of 7-0, but was 1-6-1 down the stretch and were fortunate to have gotten the number five seed over the Chicago Fire due to a tiebreaker. 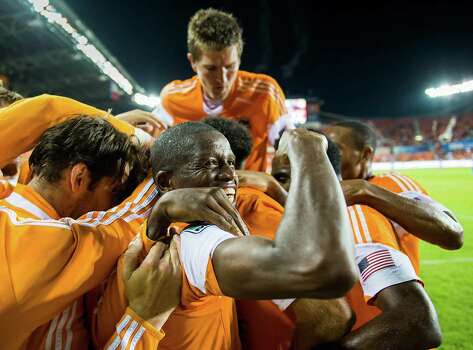 But this is Dynamo Time, AKA the MLS playoffs and they were playing this game at BBVA Compass Stadium where they rarely lose on Halloween night.

The Dynamo stayed true to form and quickly seized control of this Eastern Conference knockout round playoff match with a goal in the 16th minute. Will Bruin received a beautiful back heel pass from Ricardo Clark that he buried into the right hand corner of the net past Impact keeper Troy Perkins for a 1-0 lead.

The next Dynamo goal in the 27th minute was courtesy of Oscar Boniek Garcia's hard work.  After stealing a pass from Impact defender Hassoun Camara he sprinted toward the 18 yard box with it and was hip checked to the ground by Hernan Bernardello to earn a penalty call.  Garcia then calmly kicked the penalty shot into the lower left hand corner of the net for a 2-0 lead. 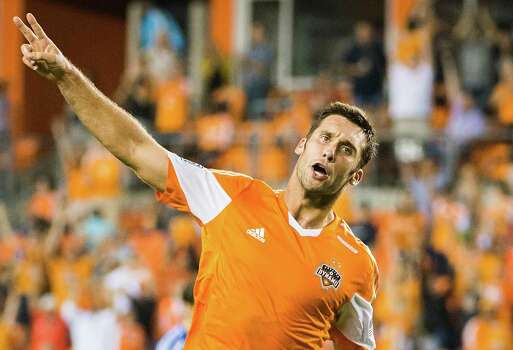 Dynamo goalkeeper Tally Hall made two impressive saves of Marco Di Vaio in the 42nd and 61st minutes to keep his clean sheet with Bruin notching his second goal of the game in the 72nd minute to make it 3-0 and punch the Dynamo's ticket to the MLS Eastern Conference semifinals.

Then we had a Halloween night appearance of soccer hooligans in the 89th minute dressed in Montreal Impact uniforms.

Already down a man because Nelson Rivas earned an early trip to the locker room with his second yellow card in the 70th minute, the Impact's Andres Romero kicked a fallen Kofi Sarkodie while he was on the ground trying to keep control of the ball.

Neither one of these teams like each other, and Romero's actions triggered an on the field melee in which Marco Di Vaio scratched and slapped the Dynamo's Corey Ashe.  While Ashe was given a yellow card, Romero and Di Vaio were given red cards and sent off for their nekulturny actions with referee Mark Geiger wisely blowing the whistle to end the game a minute later.

"There's really no place in soccer for what the player did to Kofi," Dynamo head coach Dominic Kinnear said.

Sure isn't.  But that's okay, Di Vaio and Romero will have the rest of the MLS offseason and the one game suspension to start the 2014 MLS season to contemplate that point now that the Impact's season is over.

Once again it's an MLS playoff matchup for the Dynamo against a team that dominated them during the regular season.  The Red Bulls beat them three times by an aggregate score of 9-1, but this is Dynamo Time now.

We'll see on Sunday.
Posted by Monica Roberts at 12:00 PM