Because of the global reach of my blog and I'm not 'scurred' to give my thoughts about many issues inside and outside of the trans community, I get my share of opportunities to comment on the issues of the day.

Sometimes they even end up in print in places other than this blog.

Recently GLAAD and The Wrap asked me and 10 other personalities in the community that included Kye Allums, Isis King, Jamie Clayton, and Mia Ryan from Houston Beauty to comment on Trans Images in Entertainment.

My comments for the article:

1. What transgender story or character has been particularly meaningful or impactful to you?

"The best trans characters so far have been Edie Stokes in a 1977 episode of  The Jeffersons and the Alexis Meade character on Ugly Betty."

2. What is a common stereotype or cliché in stories about transgender people that you never want to see again?

"Trans media representation has been a mixed bag. We still have media outlets that refuse to follow GLAAD and AP Stylebook standards. What I would like to see are trans actors and actresses actually playing trans people, trans writers writing those roles and stories."


***
Since I was limited in the amount of words I could say in this commentary, I wasn't able to expound on them as I would have liked or can do on these electronic pages.

So let me get started with that process right now.

As for Question 1, as someone who was wrestling with gender identity issues at the time and wondering where the trans people were who looked like me, the Edith Stokes character was a revelation at the time.  I would see after that episode two years later the first of the JET stories about transpeople who shared my ethnic heritage.

The Alexis Meade character played by Rebecca Romijn, although it was in a dramedy, actually was groundbreaking in showing a glamorous trans woman in a professional work atmosphere and in a position of power and influence.  It also realistically at times touched upon the very real issues of discrimination, differing immediate family reactions to the transition and Alexis adjusting to life in her gender role.

To expand upon my answer in Question 2, one of the things that has bothered me when I ponder the issue of fictional trans media images, is that the Edith Stokes character has been one of the few African-American trans fictional characters that hasn't fit into a stereotype.

Ever since then it has been the loud drag queen, the street hooker, the escort or the over the top personality for comic relief especially when it involves a trans character of color.  Some don't even get to survive longer than the opening five to ten minutes in the program because they are a victim of a crime.

Other times we don't get a trans woman to play a trans woman.  It's either a male actor in drag or a cis woman playing a trans woman.  Sometimes they even do so with the cis woman's voice electronically lowered as Pam Grier's was in the 1996 movie Escape From LA when she played the transfeminine character Hershe Las Palmas.

When we finally did get a trans woman to play a trans character on the ABC show Dirty Sexy Money, Carmelita Rainer, the trans girlfriend of Sen. Patrick Darling IV played by Candis Cayne was killed during the second season.

When Kerry Washington played a trans woman in the 2009 movie Life Is Hot In Cracktown, she revealed during an interview that she almost didn't get the role of Marybeth because she was considered by the director 'too beautiful' to play a transwoman.

Excuse me?  And that's before we even start talking about trans men.  Fictional characters to represent them are pretty much non-existent for trans men of color. 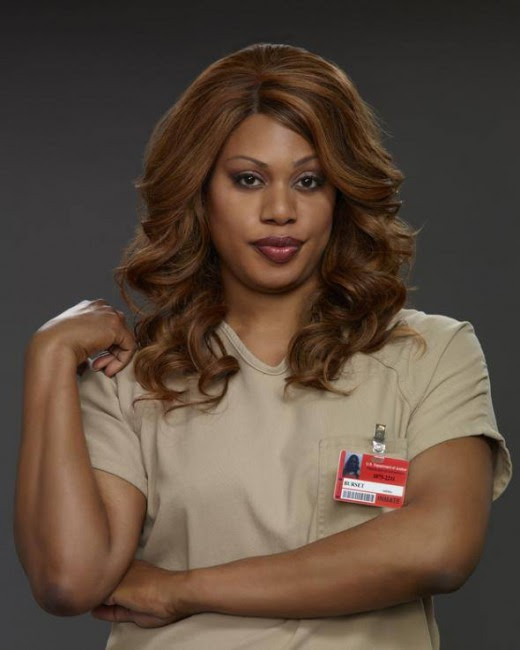 While that's starting to change a bit, we still have a long way to go in terms of getting some balance for the fictional media images of transpeople and especially non-white trans people

Bella Maddo was a film that featured an all-trans cast.  Jamie Clayton played trans woman Kyla for several episodes during the third season of the HBO show Hung and Laverne Cox currently has a groundbreaking role as Sophia Burset on the Netflix show Orange Is The New Black.

But one thing I would love to see is a fictional trans woman, and especially a transwoman of color play a professional character who happens to be a trans woman more often.  I'd like to see more trans men pop up in fiction  We do exist in the real world Hollywood, so get busy creating them.

Or if you're too busy for the job, you hand me the cash and I'll be happy to come up with the script for one.

We can only hope that happens sooner rather than later.