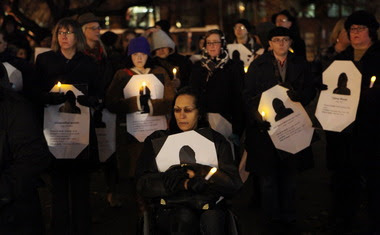 Cleveland's TDOR memorial ceremony had the added sorrow of remembering one of their own this year in the person of Cemia 'CeCe' Dove Acoff.

In addition to mourning her death when the news broke of it back in March, the Cleveland trans community then had to deal with their paper of record in the Cleveland Plain Dealer subsequently committing a journalistic hate crime against Cemia by grossly disrespecting her.

When people complained about it including me, instead of listening to what people from the community were pointing out and correcting their mistakes, the Plain Dealer took the opposite combative path and defiantly doubled down on the transphobic disrespect aimed at Cemia.

Andrey Bridges, the waste of DNA who committed the senseless crime was quickly arrested, subsequently convicted of murder, felonious assault, tampering with evidence and abuse of a corpse.   He will be serving a life sentence for it.

There was even resolution between the Cleveland TBLG community and the Cleveland Plain Dealer.  After a letter was submitted requesting they cover the TDOR and do so with honesty and respect, the Plain Dealer agreed to not only cover the local TDOR , but meet with area activists to ensure that such grossly disrespectful coverage of a trans person never happens again.

During their 2013 Cleveland TDOR, Zoe Renee Lapin, who organized one of the rallies held for Cemia  during that time person spoke to the assembled people at the memorial service.

Realness isn't seen in your physical beauty but it's revealed through your heart. It isn't your ability to use one hand to give yourself a pat on the back and use the other to hold down others going through the same journey. It is your ability to look beyond the surfaces and empower your community. To be the greatest you that YOU can be, and then when you do that, do it again-but even better. The reality that your work is never over. The reality that this list gets longer and longer every year and yet the respect grows smaller and smaller.

Realness is if one of us makes noise, we all make noise, if one of us falls, we all have fallen. Realness is leaving none of us behind, in life and in death. The deceased before us have paid the price for their truth. The living in front of them must never forget them, we carry their names in our hearts and their vindication through our actions. Realness is realizing that Islan, Ce Ce, Ashley, Kelly, the unmentioned and the unknown, cannot continue to live their truths because of the ignorance and fear that propelled so many of their lives to a tragic halt. Realness is healing our wounds and healing the wounds of those around us. Realness is knowing that many in the outside world, even within our own community do not care about us. That we are a threat to their vision of equality, that we are a "burden" that they do not wish to bear.

As much as the term gay isn't a modifier of the entire lgbtq population, the slurs that some see endearing are not signs for our acceptance and validation. That the blood that landed on our footsteps is met with silence, but the bruises met on another are somehow unequal. That in Cleveland, we care more about pandering than we do the pandemic of inequality many of us face everyday. That we are told to all stand up for one cause, but have a seat for another. Your time will come, just wait. Wait...

Realness is the fact that the time is up. That our community cannot afford one more loss. That our family will not fall victim to your hand nor your words. That we ARE family. We are not in competition with each other. We must remain in harmony with one another. Our journeys may not be the same, but we are all in this race together. Our histories, our realities could not have made us any further apart-but I feel so close to each and every single one of you. Our realness, together, is our realness, together. We are our truth, we have manifested our reality. We are united, we embody those fallen and we shape the road ahead, and when we fall together-we rise together.