It took me a little longer than I anticipated, but I'm finally in the Big Apple city limits for the first time since May 2000.

But not without some travel drama I'm going to break down for you in this post.

Due to thunderstorms building around the Hobby airport area my airplane for my Southwest flight to LGA was delayed from Austin and didn't get to my gate until close to the12:30 PM CDT scheduled departure time.  We boarded the aircraft and pushed off the gate only to experience an ATC delay that had us getting airborne one hour late

And thanks to that local weather, it was a slightly bumpy ride for most of the initial leg to St Louis.  I also had the woman in the seat behind me on that initial leg annoyingly sticking her knees into my seat to where I felt them in my lower back.   Thankfully she got off in St Louis, but we didn't make up much time on that leg or the subsequent STL-LGA one either.

So we were an hour late when I got to LGA, buit what made up for it was on final appraach we flew over the still under consturction Freedom Tower and the World Trade Center Memorial and up the Hudson side of Manhattan before we made the sweeping right turn over the Westchester County burbs and into LGA.

After picking up the bag I checked, next task was to call my friend who was supposed to pick me up, but my phone call to her rolled over to her voicemail box.  No problem, so I go to Plan B and decide to get a MetroPass to catch the bus and subway to my hotel. 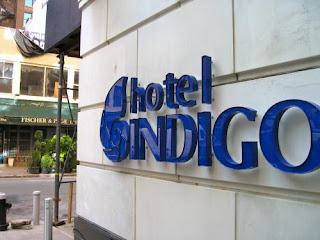 I get to my station on 28th Street from the 6 train, but discover I made a wrong turn that had me walking in the opposite direction from my hotel on W 28th Street.   By the time I discover my error, I've burned another twenty minutes and had to double back from whence I came.

I finally get to the hotel at 9 PM EDT tired, frustrated and a little embarassed, and find out I just missed Melissa Sklarz who intended to surprise me.

So I finally get a stress relieving and well deserved hot shower after checking into my 6th floor hotel room and get a call from my expat Houston homegirl Stacey Langley literally moments after I get out of the shower.

She picks me up twenty minutes later and as I get a late night bite to eat nearby I recount my travel day in addition to filling her in on all the latest back home political news and happening before I head back to the hotel to get some sleep.

And yep, sleep is the operative word, because I'm writing this post after midnight New York time, I have a busy day tomorrow and I don't want to be doing so with bags under my eyes.

I also get to find out in afew short hours who else is taking this GLAAD National POC Media Instiutute training class with me .
Posted by Monica Roberts at 11:00 PM