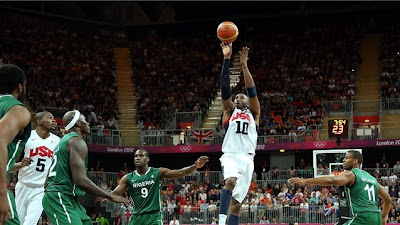 Team USA's mens b-ballers are 2-0 in Group A play and despite a comfortable 98-71 win over France and a 110-63 win over Tunisia, there were two things I had been worried about with this team.

I'd been concerned about the slow starts of the starting five players, who were being majorly outscored by the bench brigade 180-10 and the abysmal three point shooting so far.

The new FIBA 3-point line is a foot shorter than the NBA distance and I was wondering if that was impacting them  After yesterday's record setting 156-73 game against Nigeria that tore up the Olympic basketball record books, I'm not worrying about their three point shooting abilities for the rest of this tournament.

Their winning margin of 83 points beat Team USA's previous Olympic best of 72 points against Thailand set during a 101-29 win in 1956.   Kobe Bryant got an initial 13-0 scoring run started with a three ball on the opening possession of the game as the USA lit up a Nigerian team that started the game packing the paint with a record setting 29-46 barrage from 3 point range (63 percent) and shot 71 percent for the game. 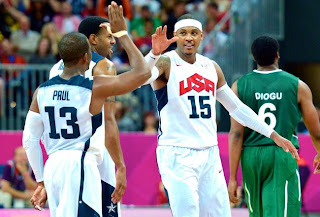 Team USA scored 49 points in the first quarter, had 78 by halftime, passed the 100 point mark midway in the third quarter and after Andre Igoudala hit another (ho hum) three pointer with 4:37 left in the game to give them a 139-68 lead, they surpassed the previous Olympic record 138 points Brazil scored in a 1988 game with Egypt.

The 78 first half points broke the old Olympic record of 72 scored by that same 1988 Oscar Schmidt led Brazilian team against China.
.
Oh yeah, considering FIBA basketball quarters are only 10 minutes long, unlike the 12 minute ones you get in the NBA, the numbers are eye popping to say the least.

Carmelo Anthony's 37 points in 14 minutes of work thanks to 10-12 three point shooting broke the 31 point US Olympic record set by Stephon Marbury against Spain in 2004.

But playtime is over for Team USA with games against Lithuania on Saturday and Manu Ginobili-led Argentina waiting for them on the schedule.