I get e-mails and comments on my Facebook page every time I call the Republican party out on their racism by sarcastically spelling the party name with three K's (RepubliKKKan) or calling the Teapublicans the Tea Klux Klan.   They try to pimp that false equivalency meme and claim that the Democrats engage in it, too.

Umm, no they aren't.   And don't even try to come at me with that elephant feces.

If your presidential campaign is predicated on not talking about the merits of your candidate, but blowing racist dog whistle comments to stir up the bigot base of your party because you refuse to compete for the votes of non-white American citizens, you actively work to suppress their votes,  and you have openly disrespected the first African-American president since he took the oath of office in 2009, don't be surprised when your fellow Republicans and the people your campaign tactics validate and appeal to feel empowered to unleash their inner Klansman and their bigotry at inopportune moments.

David Shuster tweeted about an incident that occurred at the Republican convention Klan meeting now taking place in Tampa in which an African-American CNN camerawoman had peanuts thrown at her yesterday by a GOP convention attendee followed by the comment "this is how we feed animals'.

CNN posted a written statement saying, “CNN can confirm there was an incident directed at an employee inside the Tampa Bay Times Forum earlier this afternoon. CNN worked with convention officials to address this matter and will have no further comment.”

No further comment?  You're joking, right?   That's why I switched to watching MSNBC because CNN in my opinion has been far too busy trying to coddle the Republicans instead of calling them out on their fascist and racist bull feces. 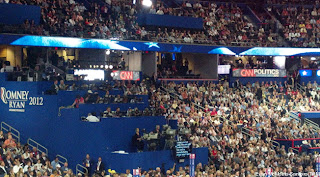 So what did the convention officials do to the GOP attendee who committed this microaggressive racist act?   Did they throw them out for the rest of the convention or just for a day with a wink and nod to the reprehensible behavior?   Did the knee-grow conservafools placate the bigoted attendee by saying the CNN camerawoman 'provoked' it?   Is the unnamed so far GOP attendee a credentialed delegate?   An alternate?   What state are they from?  Are they a proud member of the Tea Klux Klan or the Paulistas?

These are the questions that need to be answered instead of swept under the rug and trying to deny the incident happened.  The one thing it confirms once again for African-Americans is that the Republican Party is racist from the top of its presidential ticket to its grassroots.

It also ensures non-white Americans will continue voting for Democrats.

TransGriot Update: Turns out it was TWO GOP convention attendees, not just one.  It's still reprehensible behavior no matter how many peeps participated in it.
Posted by Monica Roberts at 8:00 AM