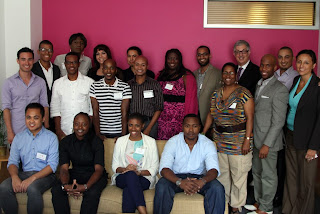 There's a reason I'm writing this post live from New York and endured that drama filled travel day.  It was to attend the 2012 edition of the GLAAD National POC Media Institute.

Today was the day I would discover who the other people were in my training class   I exited my sixth floor hotel room and headed to the hotel lobby around 8:15 AM and was ecstatic to find out when the elevator door opened that one of the people involved was NBJC's Je-Shawna Wholley.  I also discovered there were other familiar faces in my group such as Maya Rupert, who I met at the 2011 Out On The Hill, Vincent Villano from NCTE that I met at the 2012 edition of Netroots Nation earlier this summer and Tiq Milan. 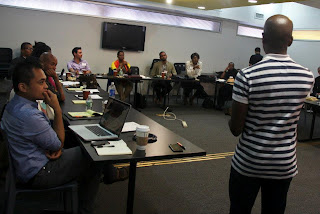 So as Je-Shawna and I greeted each other, I was also introduced to my classmates I hadn't had the pleasure of meeting before today who were also here for the 2012 edition of the POC Media Institute New York Division.   Introductions were made before we were met by GLAAD's Monica Trasandes and Brian Pacheco and escorted to the nearby 4th floor offices of GLAAD for the day.

In addition to spending an enjoyable and informative day with GLAAD team members Monica, Brian Marcus Brock,  Darryl Hannah and super fellow Geoff Montes we were introduced to our media trainer Joel Silberman.  My POC Institute classmates and I on our first day got to participate in mock interviews (I took the plunge and went first), learn some concepts in terms of being more effective media messengers for our rainbow community, learn some of GLAAD's history and past and current campaigns to increase the media visibility of POC rainbow people and have a lot of fun while doing so. 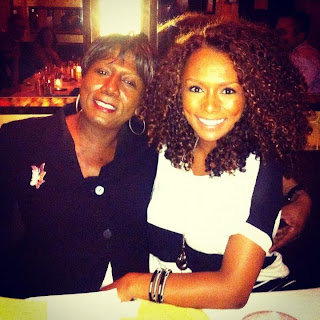 We wrapped up Day One a little after 6 PM EDT before heading to a nearby restaurant about 7:30 PM to eat dinner, enjoy each others company and discuss our first day.

That dinner also had two special guests.   One of the special guests was GLAAD's director Herndon Graddick, and the other was Janet Mock.

Yep.  I finally got to give her that hug I promised her in addition to us talking for most of the evening about a wide variety of subjects including her ongoing projects.

Tomorrow is Day Two in which we'll be heading to a local TV studio, getting made up and taking what we learned from Day 1 and building on those concepts.

That means it's going to be another early day tomorrow, so I'd better get some beauty sleep.   Don't need the makeup artists having to erase bags from under my eyes.
Posted by Monica Roberts at 10:00 PM