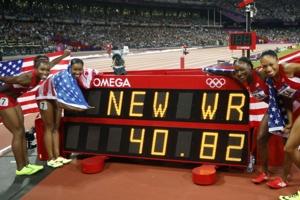 For American track fans, winning the 4x100 and 4x400 relays in an Olympics or World Championships is like winning the gold medal in basketball.

It's expected due to the long and distinguished history in these events on both the men's and women's sides..

During the Sydney Games a relay team featuring gold medal winner Marion Jones had to settle for bronze because of a sloppy second exchange between Torri Edwards and Nanceen Perry.

In Athens in 2004, they bungled the second exchange again and failed to finish because Lauryn Williams started too early and Jones passed her the baton beyond the legal zone.

And in Beijing the buzzard's luck for the women's 4x100 relay team continued.  They didn't even make the final because they failed to finish in their qualifying heat. 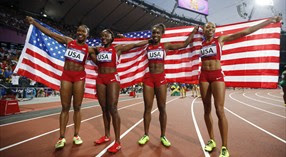 Track fans in the States were getting restless with the miscues and the gold medal drought in one of the events we consider a signature one for our Olympic track teams of either gender.

The drought ended in resounding fashion last night.   Not only did the USA quartet of Tianna Madison, Allyson Felix, Bianca Knight and Carmelita Jeter win gold, they beat their Jamaican rivals in a resounding world record setting time of 40.82 seconds.


Great job ladies.   Now how about an encore in Rio?
Posted by Monica Roberts at 12:00 AM