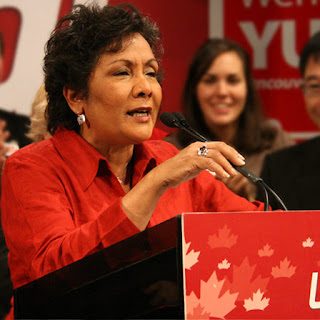 One of the legislative casualties because of the Canadian election call earlier this year was Bill C-389, the Trans Rights Bill authored by now retired NDP Critic Bill Siksay that passed the House of Commons 143-135 on Third Reading but was stuck in the Conservative controlled Senate .

The private member's bill Siksay was sponsoring for the third time had it passed would have given trans Canadians explicit rights under the Human Rights Act and the hate-crimes provision of the Criminal Code.

MP Fry was a supporter of the previous bill, and promised the retiring Siksay that if C-389 failed , she would bring it up in the next Parliament.

"I said, 'Look, if you’re leaving and the bill doesn’t get through, I will bring it back for you,'” According to Xtra, Fry sent a letter to the NDP’s Libby Davies about the issue. “I said, 'It’s not about you or me, or the NDP or the Liberals, it’s about trans persons, so let’s come together and work on it.'”

Now that the fall session of Parliament is about to get cranked up north of the border, despite the fact that the Conservatives have a majority in the House of Commons, the Liberals and the NDP are joining forces to try to get civil rights coverage for transgender Canadians.

On September 19, making good on her promises to Siksay and the promise she made during the campaign to reintroduce this bill during the next Parliament if she won reelection, Vancouver Centre Liberal MP Dr. Hedy Fry introduced Bill C-276 in the House of Commons, followed on September 21 by the introduction of Bill C-279 by NDP queer issues critic Randall Garrison of Esquimalt-Juan De Fuca .

Bill C-389 had some Conservative support that included two Cabinet ministers, but now that they have a muscular 167 seat majority, will those Conservative MP's support it?

Fry's Bill C-276 is an exact redraft of the previous Siksay bill, and would amend the Canadian Human Rights Act to include gender identity and gender expression as prohibited grounds of discrimination.

It would also amend the Criminal Code to outlaw hate speech that advocates genocide against groups distinguished by gender, and to allow evidence that a crime was motivated by hate based on gender to be taken into account during sentencing.

In addition to Dr. Fry's and MP Garrison's support, it also has the support of Green Party leader MP Elizabeth May.

Will be interesting to see how far this one goes in this Conservative controlled chamber.