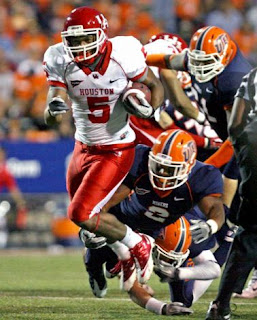 Despite getting off to another slow start offensively, the Cougars business trip to El Paso had a more successful conclusion to it than the last one in 2009.   UH piled up 710 yards of offense and held on for a 49-42 C-USA win against the UTEP Miners.

UH was held scoreless in the first quarter and spotted UTEP a 14-0 lead but woke up to score 21 points in a 2:31 span to take a brief 21-14 lead on two Charles Sims touchdowns and a 34 yard TD on a fumble recovery by UH linebacker Marcus McGraw.

UTEP answered with a 63 yard nine play drive capped off by a 20 yard TD strike with 45 seconds left in the quarter to tie the score going into halftime at 21-all.

The Cougars came out on fire in the second half as they scored three times in the third quarter and once in the fourth and held on for dear life in the final minute as UTEP drove the ball from their 22 to the UH 19 before the Cougar defense rose up and withstood four nerve racking plays to put an end to that potential game tying drive.

Case Keenum was 30-46 for 471 passing yards in this game and Charles Sims in addition to rushing for 111 yards and two TD's had 90 yards receiving as UH moved to 5-0 on the season and 1-0 in C-USA West Division play.

The Cougars are also 5-0 for only the fouirth time in school history and the first time since the 1990 season and the next three games on the schedule are at the Rob.