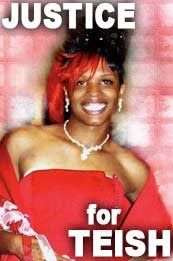 Looks like there's been some positive developments in the wake of my post on the lack of coverage of the DeLee trial vis-a-vis the Zapata one.

Cara posted on Feministe, and hopefully we'll see other commentary elsewhere in the blogosphere. If Teish is going to receive justice, we have to relentlessly remind people now that transpeople are human beings, too.

The trial of Teish's alleged murderer has been pushed back to a Monday, July 13 start, assuming it doesn't get delayed again.

I'm hoping that Black transpeople actually get some media face time in terms of being spokespersons about this case.

Thanks to TransGriot regular reader Gina, a Facebook group has bee started as an info clearinghouse for the upcoming case.

The Syracuse media's terminology is still problematic, so GLAAD needs to be called in to work with them and make them aware of the AP Stylebook standards for covering trans people. GLAAD also has on their website a media press kit as well with downloadable PDF documents

Oh yeah, once again, here's what the AP Stylebook has to say about covering transgender people:

So Syracuse media, no more using the old name in your newscasts and newspaper/print/Internet articles. Teish Cannon lived 24-7-365 as a woman, so the SHE pronoun is appropriate to use to respectfully discuss her and the case.

What's not cool is using the word 'lifestyle'. That's a right-wing tactic and problematic terminology which is seen by TBLG community as disrespectful.
Posted by Monica Roberts at 5:02 PM

Seems as if the Syracuse area tv media isn't using male or female pronouns, although they certainly refer to Moses Cannon and not Teisha Green. What I've increasingly seen is the use of "transgendered individual" in their references to her. While perhaps not as offensive as "he," it does in effect, make her genderless and neuter her. She clearly identified as a transsexual woman in transition. The media in Syracuse is more conservative then it was in Colorado for the Zapata trial. This is made more complex by the frequent initial identification of Teisha as "a gay man."

As a recent resident of Middletown California, I proudly flew my American Flag which was once flown over the House of Congress. I also am out and proundly mtf transgendered.
I recently fled Middletown due to a rash of vandalisms, a false police report involving a child(which the Sherrif declared unfounded), and finally an attempt on my live via vandalism of my Jeep.
My tires were slashed not soas to flatten them but as to fail which one did on HWY 5 at 70mph.
I have a new home now in kinder territory and recently returned to retrieve more of my belongings only to find my treasured flag had been taken down and thrown to the ground. It shows the true respect the right has for freedoms, i.e. if its not "thier" America it isn't America at all.
The man who raised me took two bullets at Normandy near St. lowe. He was born in Germany and was shot by a German soldier defending our freedoms. Thanks for the respect Mrs and Mr. Right Wing!