Many of us in POC America have been saying for years now that progressive white people need to call their racist relatives and family members out instead of ignoring them in silence.

That call for our white allies to call out their racist kin has taken an even more urgent tone as the bigots have come out to play in the wake of Dolt 45's election.

We have an interesting example of how to call out your racist relatives coming from Arizona. 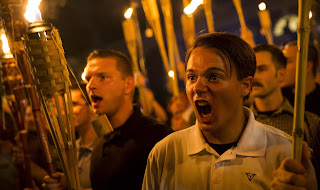 Paul Gosar (R) is a far right wing nut congressman who has repped Arizona's 4th Congressional District since 2013.    Gosar has claimed that the infamous Nazi rally in Charlottesville, VA was planned and executed by 'The Left', defended British far-right activist Tommy Robinson, attacked "disgusting and depraved" Muslim immigrants at a speech in London in July, and in a Vice News interview, called billionaire George Soros a Nazi sympathizer.

His six siblings, horrified and disgusted by his long list of far right peccadilloes, all signed a letter printed in the Kingman Daily Miner stating: "It is extremely upsetting to have to call you out on this, Paul, but you've forced our hand with your deceit and anti-Semitic dog whistle."

The Gosar siblings haven't stopped there.  They are now taking the step of endorsing his Democratic opponent, Dr. David Brill  in the upcoming November election because they don't want him repping the 4th Congressional District any longer.

To make that happen, Tim, David, Jennifer, Grace, Gaston, and Joan Gosar also cut a brutal ad that called their racist brother out.


Brill 's campaign s considered a longshot to unseat Gosar, but when your own family is willing to go on camera to say that you shouldn't be in Congress, that's gotta hurt you big time politically.

We'll find out how effective the ad was on November 6.