The GLAAD Media Award Is Home!

I'd gone out to run an errand and was passing the complex office when one of the apartment managers let me know they had a package for me.

When I took it back to the apartment to open it, inside was the GLAAD Media Award I'd won back in April! This isn't the first time I've won an award from GLAAD.   Two years ago I was on the Left Coast at the GLAAD Gala San Francisco to pick up a special recognition award from them presented to me by the lovely Angelica Ross for my ten years of telling it like it T-I-S is about what's happening in our community and beyond.

Hope I get to return the favor for Angelica someday. 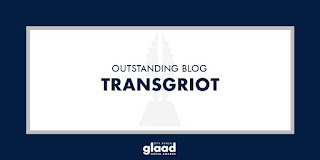 After two previous Outstanding Blog nominations in 2014 and 2017, the third time was the charm as they say in 2018 as I finally captured the Outstanding Blog award over some tough but equally deserving competition.

And to be honest, before they called my name, I thought Mark S. King's 'My Fabulous Disease' would get it this year

I'm exceedingly proud to say that I'm the first (and hopefully not the last) trans blogger to win it.

I'm the second trans person, however to be nominated for it.   I'm only the first trans feminine person to do so.  Dr. Kortney Ziegler's blac(k)ademic back in 2013 was the first blog by any trans person to get a GLAAD Outstanding Blog nomination in this category

It was also historic in the context of for the first time ever in the history of the GLAAD Media Award Outstanding Blog category, two Black LGBT bloggers won this award in consecutive years.

Next year I'm looking forward to seeing who wins the Outstanding Blog category.  But for now, I'm thinking about just how good it looks on my shelf next to my decorative silver typewriter and how much work I put in to get it.