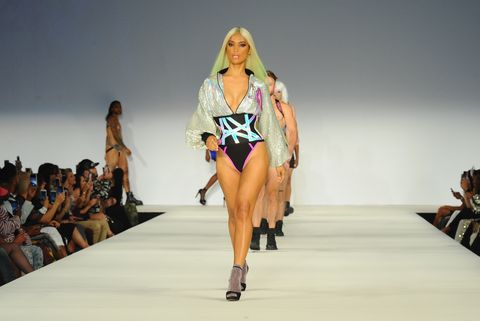 More importantly, the fashion industry is giving trans models unprecedented opportunities to work and have a successful modeling career.

More evidence of this occurred during the recently concluded 2018 New York Fashion Week.

His Marco Marco brand of clothing has always catered to the TBLGQ community, and this time he took it a step further by casting all 34 spots in his New York Fashion Week show with trans people.

While it is not uncommon to have out and non disclosed trans people strutting the catwalks during the New York Fashion Week major runway shows, they tend to be in those instances cast in shows that are overwhelmingly comprised of cis models.

The Marco Marco Collection Seven show was the first time in New York Fashion Week history that a major show was cast in which all the participating models were transgender.

“Although I have always had trans and non binary people in my shows, it became apparent to me that their presence was often overshadowed by cis gay men or cis gay men in drag,” designer Marco Morante said in an interview when asked about the casting. “I wanted to create a space to celebrate trans bodies. This was an opportunity for their presence to be undeniable and reinforce that trans is beautiful.”

Morante is one of the small cadre of designers that openly prioritizes hiring trans models for their runway shows.

One of the participants in this historic show was my BTAC homie Dezjorn Gauthier, who rocked the runway along with models Laith Ashley, Geena Rocero, Carmen Carrera, Pose actresses Angelica Ross and Dominique Jackson, Transparent actress Trace Lysette, Gigi Gorgeous, Aydian Dowling, Gisele Xtravaganza, Claudia Charriez and Arisce Wanzer just to name a few of the trans peeps walking in the historic Collection Seven show that was attended by Laverne Cox.

Speaking of my BTAC homeboy,  Gauthier had this to say about his participation in this historic show.


“It’s groundbreaking.  Marco is breaking the glass ceiling for transgender models especially transmen. This was more than experience for me, it was an act of resilience”

Gauthier mentioned he will continue to use modeling as a form of advocacy to spread inspiration and empowerment worldwide.


Here's the video from that historic show