There has been some confusion sown in the last few days about whether the latest person we have lost to anti-trans violence in Brenda Bostick was actually trans feminine.   That came in the wake of a unverified report of a person claiming on Facebook she was a caseworker showing a male pic of someone she alleged was Bostick was named Kenneth.

Because I had a trans panel discussion event I was participating in on Saturday with a memorial service component part of it,  Rev. Denise Junious who organized it had been hearing the chatter, and wanted to make sure the names list was accurate when we read those ten names of the people we've lost in 2017.

The claim wasn't adding up either. so I tapped some of my reliable sources and contacts in New York who also had the same questions because they were planning a vigil for her and we're making calls and talking to people themselves

And yes, because I strive for accuracy in whatever I post here at TransGriot, especially when it comes to keeping track of anti-trans murders, needed to know for myself if it was true that we've had our first trans masculine murder since 2013.

So what did my contacts tell me?   In the case of Ms. Bostick,  She's trans feminine.  Turns out that two of those contacts got in touch with the coroner who performed the autopsy on Bostick's body and shared with my contacts the body had a penis and breast implants.

So yes I repeat.  Ms. Bostick is a trans feminine person with possibly some genderqueer elements at play here and a story that is still evolving.. 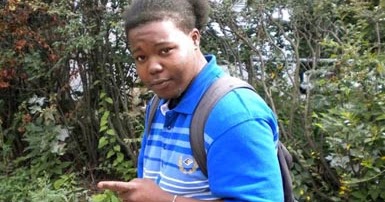 I'm quite aware of the fact trans men have been assaulted and murdered like Evon Young was in Milwaukee.  Murders of trans men also happen internationally like Yoshi Tsuchida in Japan and F Hilario in Brazil have also been horrifically brutal, and in Evon Young's case his body has never been found.

Trust that if God forbid, we have a trans masculine person taken from us far too soon, I'll be just as diligent and on the case about putting info about a memorial service or vigil out there, ensuring the trans masculine person isn't misgendered  by the media, pushing for justice and keeping you informed about what happened as I have been about my sisters

But one thing we can all agree on is that I don't want to have to write another story or press release about another trans person being killed in 2017.

But sadly, we have seven more months left in this year .

Hello viewers around the Globe, I was despondent because i had a very small penis, about 2.5 inches soft and 4 inches hard not nice enough to satisfy a woman, i have been in so many relationship, but cut off because of my situation, i have used so many product which doctors prescribe for me, but none could offer me the help i searched for. i saw some few comments on the internet about this specialist called Dr. kabaka and decided to contact him on his Email i saw on the internet dr.kabakasolutiontemple@gmail.com so I decided to give his herbal product a try. i emailed him and he got back to me, he gave me some comforting words with his herbal pills for Penis Enlargement, Within 3 week of it, i began to feel the enlargement of my penis, ” and now it just 4 weeks of using his products my penis is about 9 inches longer, and i had to settle out with my Ex girlfriend Jane, i was surprised when she said that she is satisfied with my sex and i have got a large penis. Am so happy, thanks to Dr. kabaka I also learn that Dr. kabaka also help with Breast Enlargement Hips and Bums Enlargement etc.. If you are in any situation with a little Penis, weak ejaculation, small breast_hips_bums do get to Dr. kabaka now for help on his email: dr.kabakasolutiontemple@gmail.com or whatsapp or call his mobile line +2347059073543