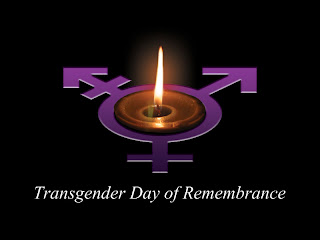 With the official November 20 TDOR day rapidly approaching this Friday and events being held around the country and the world to remember the people we have lost to anti-trans violence, we in Trans World have begun to use the days in the runup to TDOR, now that we have the media's attention. as an opportunity to educate and inform people about the issues that affect trans people besides the horrific levels of violence predominately affecting young non-white trans women. Whether the projects come from advocacy organizations like GLAAD and their trans microaggressions photo project they launched today, or trans oriented grassroots projects, videos. interviews and panel discussions around the country that won't get much media attention, these are just some of the things done during Trans Awareness Week.

On the West Coast that same night at the just concluded San Francisco Trans Film Festival, the MAJOR! documentary was shown for the first time to a sellout crowd at the Castro Theatre.

I'm taking part in two TDOR events this week in Houston.   One will be a Wednesday TDOR organized by Dee Dee Watters and sponsored by the radically inclusive Progressive Open Door Christian Center   It will take place on the TSU campus at St. Luke The Evangelist Church.  Address is 3530 Wheeler St.

Thursday evening from 5:30-7 PM at HCC-Southeast, I and Lou Weaver will be along with Dr. Ilija Immanuel Gallego taking part in another TDOR event sponsored by the Black Student Association, Women and Gender Studies Program, Counseling Center, and Diversity and Inclusion Committee.

It will take place at the Angela Morales Building - Lecture Hall, and the address is 6815 Rustic Street

These local examples are just some of the ways around the country and the world that Trans Awareness Week has become the trans community's moment to discuss our lives, take a hard introspective look at ourselves with initiatives like the Elizabeth Rivera created #StopTheShade campaign, hold trans themed events and talk about the issues that affect our lives.

It also gives us an opportunity to examine ways we can educate people about us trans peeps, build better coalitions to advance trans human rights here and around the globe. and most importantly, drive home the point that trans people's lives and our humanity matters.