The Houston Trans Community Fights Back

After spending a few days venting about the results of the HERO vote, now that we H-town trans people have gotten the venting about it out of the way, comes the time for turning this lemon situation into lemonade.

Saturday members of the Houston based Transgender National Alliance and our allies stood at the busy corner of Montrose Blvd and Westheimer Rd in the heart of the gayborhood for a rally to combat the anti-trans negativity stirred up by the HERO haters.

Yesterday at the Montrose Center another event was organized by Dee Dee Watters in which I participated in along with Melissa Murry and Veronika Simms.  The goal of the event was to begin the process of getting our diverse trans community and our allies some common media talking points about our trans lives to use if they find themselves being asked to do media interviews as I and other local trans leaders have found ourselves doing in the last few days.

This event also included some practice using the new talking points in mock interviews, and won't be the only time we do this.  It will be an ongoing thing.

Speaking of upcoming events, we also have an upcoming one at MSociety in which we will have a Trans 101 conversation with people from the Black SGL community.

The same conversations will also be conducted in other sectors of the Houston LGB community as well since we were disheartened to learn that some of our LG allies also drank the right wing potty Kool Aid and voted against the HERO. 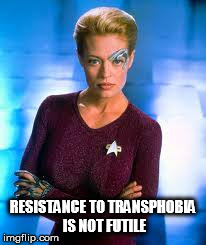 So yes, we suffered a disappointing defeat in which we trans folks were gleefully slimed and demonized at every turn by our opponents.  But we Houston trans folks are a resilient bunch, and far from silently acquiescing to what happened November 3, we are gearing up to fight back because resistance to transphobia is not futile.

We are taking heart in a quote by the Rev Dr Martin Luther King, Jr to guide our future big picture efforts as we fight back from the punch our right wing opponents threw.

We are on the right side of history, and we will prevail.  We just have to work harder than the Forces of Intolerance to make that day happen here in H-town.