The Fascinating Story Of Mary Jones 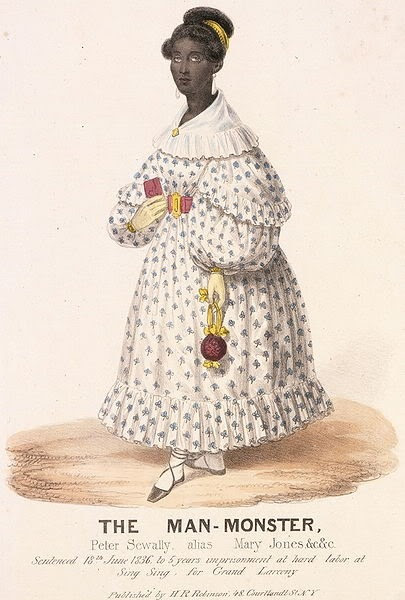 The ongoing mission of TransGriot is to unearth nuggets of our trans history so that we drive home the point that trans people didn't just pop up in the second half of the 20th century.

We have not only been part of the divers mosaic of human life, we have also been as I have stated more than a few times on this blog, part of the kente cloth fabric of the Black community.

Thanks to Mey from Autostraddle and Transas City, I was introduced to another historic Black trans person in the story of Mary Jones.

Jones was born Peter Sewally, and spent time in New Orleans working with call girls there.  In addition to making their beds, she would welcome their clients and collect the money.

She was encouraged by them to wear feminine attire because in her words, 'She looked better in them' and continued to do so during her time living in New Orleans.  Jones became a New York resident in the 1830's and in addition to making a living engaging in sex work, also was a pickpocket.

It was that second talent that got her in trouble in 1836 for lifting a wallet containing $99 ($2600 in current US currency) from a white john she'd slept with.   When she was arrested, interrogated and strip searched it was discovered she not only had male genitalia, but a leather device in the shape of a vagina she wore around her waist to keep her clients from learning her secret.

When police searched her home they discovered more wallets, trinkets and watches she'd liberated from her wealthy clients who were fearful of reporting the thefts in an increasingly morally conservative time period.

At her sensationalized trial that began on June 11, 1836, she testified that she had always dressed in femme attire while living in New Orleans and attending parties amongst our people.   But this trial was also happening in the wake of recent anti-abolition and anti-amalgamation riots, and it was unlikely she as a Black gender variant person was going to escape punishment for the crimes committed against New York's upper class citizens in that environment n which as she was led into the courtroom was jeered, accosted and prodded.

The media also humiliated her, referred to her as 'the Man-Monster' and revved up the hysteria

Sarcastic moment over, back to the story.

After serving that time, Jones disappeared from recorded history.