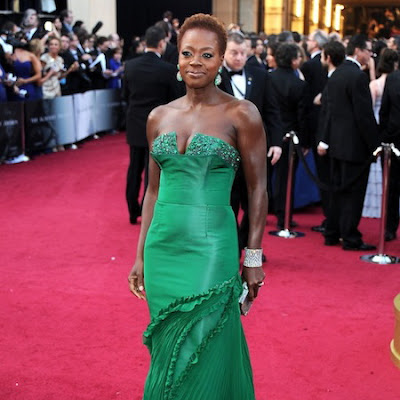 After all the times I've called out Black gossip blogs for misgendering Wendy Williams, she does some foul crap like this to another Black woman.   Renee of Womanist Musings calls her azz out on it.

And Wendy, the next time the Black gossip blogs decide to have fun disrespectfully calling you a man, the t-word or masculinizing your name, I'm staying out of it.

I refused to watch the Oscars because I could not stand the idea of having to watch as a Black woman received an award for playing a maid in the year 2012.  To this date, I have not seen The Help, nor do I have any attention of doing so.

As you might imagine, it has been impossible to avoid coverage on the Oscars.  I was happy to see that Viola Davis chose to put her wigs aside and wear her natural hair at such a public event. What I was less pleased about was Wendy Williams response.  According to Madame Noire, Ms. Williams remarked, that she doesn't want to see “Room 222″ look on the red carpet."  For those who are unaware, "Room 222 refers to a show from the late ’60s and early ’70s, about a history class taught by a black man". This to me implies that Williams was not only suggesting that there is something inherently wrong with natural hair, but that a woman choosing wear her natural hair looks like a man.

I am not at all pleased with the implications.  Williams has long been referred to as a trans slur by many Black entertainment blogs - yes, I'm looking at you Bossip.  She has to know first hand how terrible it is to question someone's gender identity in order to smear them.  It is extremely transphobic and it is something that is constantly thrown at cis Black women in order to support the cruel unwoman meme. For Williams to then turn around and engage in the same damn ish is disgusting.

Wendy might be fine toting around her wigs everywhere she goes, and boiling under the weight of them under the hot summer sun, but not all women feel that way, and none of us should be shamed for refusing to conform to a racist, sexist expectation of us.  Viola looked beautiful - even if the dress was ugly as hell. There was certainly nothing wrong with her hair, and that Davis felt confidant enough to be herself on her big night (despite how I feel about The Help) sends a strong message about how comfortable she is in her own skin.  It will further serve to encourage Black woman to believe that they don't have to be a slave to the creamy crack.  Even though she was just one woman wearing her natural hair, each time something like this happens, it's a step towards depoliticizing this issue.

Anywhere a Black woman is welcome to take up space, is an appropriate venue for natural hair.  We already have enough issues with White people thinking that they can pet us, and shaming us for our natural hair, without Black women playing colluders and joining the attack.  What Williams did was grade A sell out behavior, with transphobia thrown in for extra seasoning.  I think we should give Williams an award for managing to fit in so much fail in one sentence.

Wendy, I am going to have to ask you to have a huge mug of shut the fuck up.  Life is hard enough for trans women of colour, trans women and Black women without your insensitive, thoughtless commentary.