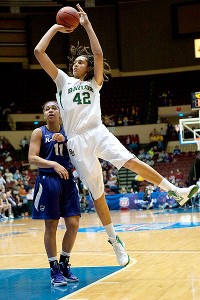 
I've actually done a better job picking the women's NCAA tournament champion than I have for the men.   Then again, UConn was on The Streak'

Last year I expected my Houston homegirl Brittney Griner and the Lady Bears to make it to the Final Four but had another set of Houston homegirls in the Ogwumike sisters and Stanford winning the title.

The NCAA title did come back to Texas and along the Brazos River, but it's residing in College Station instead of Waco.

After being beaten by the Lady Bears three times in the 2011 season, the Aggies upset Baylor in the Dallas Regional final to punch their ticket to their first ever Final Four.  Once they arrived in Indianapolis, the Aggies knocked off Stanford and 'home team' and Indiana home girl Skylar Diggins Notre Dame squad, who beat Tennessee and their nemesis UConn to get to the title game for the championship..

Baylor hasn't forgotten that loss and it's fueled them to an unbeaten record so far, the Big 12 regular season and tournament titles and the number one overall seed.   And yep, Brittney and company are determined to bring that trophy back to Waco for the first time since 2005.  But can the Lady Bears take that last step and be the team cutting down the nets at the Pepsi Center in Denver?

I think so, but that's why you play the games..