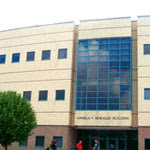 Wanted to write this post earlier, but took a nap after I got home.

Had an interesting day that started early for me at the HCC Southeast campus.  I was there at the invite of Professor Antrece Baggett to witness the first annual Women of Color Conference that started at 8 AM in the Angela V. Morales building.   I had every intention of chilling out for the next several hours and being an interested spectator.

But you know what has been said about intentions.

The format for this first annual event was rather interesting.   The organizers asked for student submitted papers and Power Point presentations on various subjects.   Nine students eventually did so on subjects ranging from the challenges of .single motherhood to Madam CJ Walker, Justice Sonia Sotomayor, and Dr. Angela Davis.

Because the organizers were concerned about the lack of trans content in this conference, since I was in the house I was asked to do a Trans 101 speech.  I was honored and willing to do so, however I only had a 20 minute window to fit the potential speech in.   Since I'd just come back from doing a presentation at the University of Arizona only two weeks ago, what I said then was still relatively fresh on my mind and this was a college environment I felt confident I could successfully handle that challenge.

I basically did a 15 minute extemporaneous speech in which I hit the necessary Trans 101 informational points I wanted to leave with my audience, left five minutes to ask questions and had some fun while doing so.

I also ended up picking up business cards from an attorney specializing in employment law and an EEOC rep who were in attendance to do their own presentation.    I was also approached by several students when the conference concluded a little after 2 PM  who asked me more questions about trans issues and shared their own stories, observations and concerns with me.

Just another day at the office for Moni.

Thanks to all the students who stood up in front of their fellow classmates and guests to do their presentations.  You did a wonderful job and that took some courage to do so.   I also thank the faculty of HCC Southeast for the opportunity to speak about trans issues and looking forward to doing so once again.