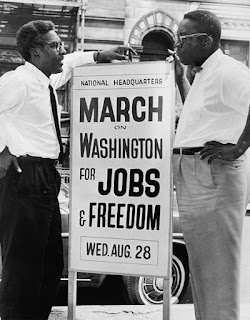 Today is the 100th birthday of civil rights warrior Bayard Rustin, who was born on this date in West Chester PA in 1912.

Rustin was an unapologetic Black gay man in an era that demanded you be in the closet about it.  He was an architect of many of the innovative strategies that the African American civil rights movement used for it human rights advances.

He introduced Dr. King to Gandhi's nonviolence techniques and was one of his advisors.  He planned the 1963 March On Washington, and his 1947 Journey of Reconciliation was the basis of the concept and tactics of the  Freedom Rides that would be used to great effect in the 1960's to desegregate public transportation in the South.

One of my favorite quotes by Rustin is one in which he was talking about te Civil Rights movement, but it is so apropos to the current trans rights movement as well.

“Our job is not to get those people who dislike us to love us. Nor was our aim in the civil rights movement to get prejudiced white people to love us. Our aim was to try to create the kind of America, legislatively, morally, and psychologically, such that even though some whites continued to hate us, they could not openly manifest that hate.”

One the 100th anniversary of the date of his birth, let's keep that quote in mind as we strive to create and win the same type of America for trans people.