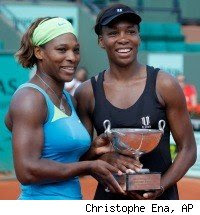 I am thrilled for my fave tennis playing siblings. They captured their 12th major doubles title and their first French Open one since 1999. They are halfway to a doubles Grand Slam with only 'Williams'-don and the US Open left to conquer.

Speaking of champions, let's get right to this week's Shut Up Fool! awards and see what fool, fools or group of fools exhibited championship level stupidity in order to walk away with our illustrious award.

The trio of Beck, Palin and O'Reilly were in contention this week (Rush is retired due to his 2010 SUF Lifetime Achievement Award win) along with John Aravosis of AmericaBlog, and a group award nomination for the Advocate magazine and Faux News.

But this week's winner, Dennis Prager, was brought to my attention by my Canadian homegirl Renee of Womanist Musings. 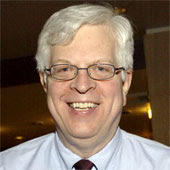 He wrote this transphobic bull feces for the conservafool blog Townhall

"Most Americans are aware that gay activism rarely presents itself as a movement solely for the rights of gays. For example, the acronym for the gay rights movement is "GLBT," meaning Gay, Lesbian, Bisexual and Transgender. Interestingly, few people ever ask about the "T." What do transgendered have to do with gays? How and why are they connected by activists, gay and straight, on the Left? Strictly speaking, gays have no more in common with transgendered people than straights do. To understand the answer is to understand much of what animates the Sexual Left.

Dennis, with that transphobic caca you could moonlight for John Aravosis at AmericaBlog the next time he goes on vacation.

There are trans people who identify as gay or lesbian as well. We transpeeps jumped off the Stonewall Rebellion that subsequently got gayjacked. Gender and gender identity discrimination affects trans, gay and straight people.

The one thing we have in common with gays and straights is that we're human beings riding on this planet with you bigoted, neo-Luddite, science ignorant fools.