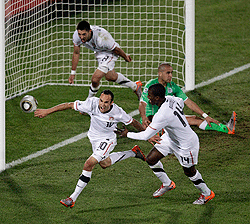 Lucky for me I grew up as a Houston sports fan. I'm used to nail biting, high pressure, dramatic games.

The USA suffered another disallowed goal by the referees, and missed point blank chances in both halves with the knowledge that the English had already scored a goal against Slovenia that was going to send them home.

A 20th minute goal by my Lone Star homeboy Clint Dempsey was erroneously disallowed by a phantom offside call by the linesman. The Cardiac Kids shook off the frustration of the disallowed goal and kept up the offense pressure.

They missed several chances to get the initial goal and clearly outplayed Algeria but the goal that allowed them to make a little World Cup history came in extra time in dramatic fashion.

In the 91st minute the counterattack against the Desert Foxes began that sent the USA men to the round of 16 for the first time since 2002.

A long throw to Donovan, a pass to Altidore who takes it quickly to the Algerian end and crosses it to the box. Dempsey is there to meet it, but so is the Algerian goalkeeper Rais M'Bolhi. The ball squirts out and a streaking Donovan buried it into the net for his 44th and most important international goal of his career.

The goal gave the USA Group C with a 1-0-2 record and scoring more goals than the runner-ups, England. They won their group for the first time since 1930.

They'll get the opportunity to make some more US World Cup history and attempt to go where no US men's team has gone before, deep into the knockout round.

They play the second place team in Group D on June 26 which will be either Germany or Ghana.
Posted by Monica Roberts at 12:00 PM