2010 Wimbledon Williams Watch-Checking Out The Draw 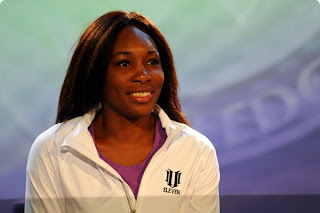 The draw for The Championships as 'Williams'-don is referred to across The Pond took place Friday and we now know two things.

The first is that Big Sis and Little Sis are on opposite sides of the Ladies' Singles bracket (thank God). If both win all their matches, they could meet in the Ladies' singles finals for the third consecutive year.

2004 Wimbledon champ Maria Sharapova is in Serena's section of the draw and they could potentially meet in the third round. She also has Justine Henin and Kim Clijsters on her side of the draw as well.

Venus has 2010 French Open Champ Francesca Schiavone on her side of the Ladies' singles draw with a possible meeting in the quarterfinals. 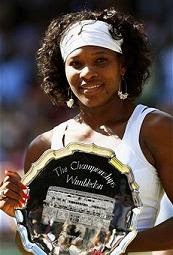 In the Ladies' doubles the Williams sisters are seeded Number one and will open their defense of their doubles title against the duo of fellow American Julie Ditty and the Czech Republic's Renata Voráčová.

If they capture this title, they would only need to win the US Open doubles crown to complete the calendar year doubles Grand Slam.
Posted by Monica Roberts at 4:30 PM