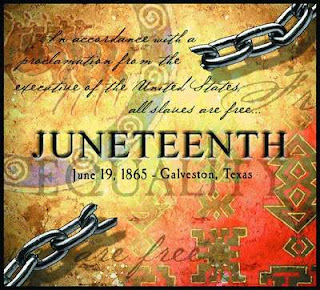 I'm back in the Lone Star State where the holiday was born, and I'm looking forward to checking out the parade in downtown Houston parade tomorrow for the first time in nine years.

I'm also looking forward to clobbering somebody's barbecue and washing it down with strawberry soda.

Since Juneteenth celebrates the emancipation of my ancestors from slavery, it's time to emancipate the truth and find out who our SUF award winner (or winners) are this week.

Seems like we had too many people to choose from this week. The usual triumvirate of Beck, Hannity and O'Reilly, Sarah Palin, BP, Gov. Bobby Jindal (R-LA), Gov. Goodhair (oops) Rick Perry (R-TX), Sharron Angle, Project 21 and Rand Paul

But this week's winner is Rep. Steve King (R-IA)

King stated on a 'white' wing radio show that President Obama has a "default mechanism" that causes him to "favor the black person" in every dispute. 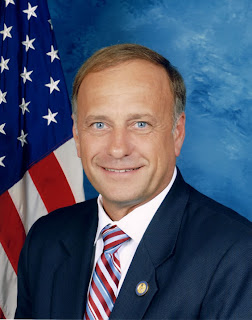 He didn't stop there. King said on the House floor June 15 that the Obama administration "defaults in favor of whichever minority they think will be the one that will most likely support their party and their agenda."

Just like you default to every wingnut that supports your party and your agenda, Rep. King.

Ain't that the pot calling the kettle black, pardon the pun.

Rep. King, you wallow in racist behavior. You have defended the Confederate flag, advocated for racial profiling, referred to the Congressional Black and Hispanic Caucuses as 'separatist groups,' said that people in the Middle East would be 'dancing in the streets' if Obama was elected because of his middle name, and was the ONLY congressman to vote against recognizing the contributions of slaves in building the U.S. Capitol building.