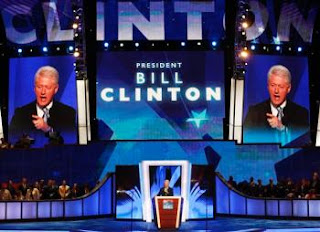 This was the speech I and many others who are Obama supporters wanted and needed to hear from President Clinton back in June, but better late than never.

As you can see, he's starting to earn his 'Black like Me' cool points back, but he's still on probation.

Now we need Brother Bill, Sen. Hillary Clinton, Chelsea and the entire Democratic family to go on the campaign trail and kick some GOP azz over the next 59 days so we can see this eminently qualified brother and Sen Joe Biden take the oath of office on January 20.

Bill brilliantly laid out so we could plainly see, why our country is in the state it's in and the differences he made and Barack can make. He ran it down. Thanks Bill.

The question is, were folks listening?