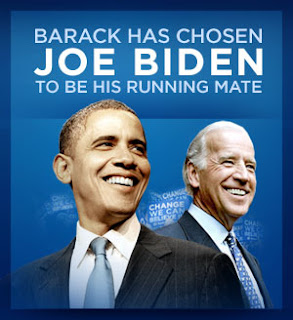 The question many peeps in the political world have been asking in the runup to the start of the Democratic National Convention in Denver Monday has now been answered.

He returned to Springfield, IL to make that announcement, where he started his campaign 19 months ago. While I was hoping that the veep would be New Mexico Governor Bill Richardson, that's too much diversity for the folks who still harbor racist prejudices and assumptions to deal with, even in my own party. Sen. Obama winning the nomination almost dictated that he was going to have to select a white person for the vice presidential slot.

To be honest, I'm glad it wasn't Sen. Hillary Clinton. Contrary to what her supporters think, she is a liability despite the vaunted strength with so-called white working class voters. That was built on smoke and mirrors, GOP crossover vote meddling and a healthy dose of good old-fashioned prejudice.

Her, Bill's and her supporters behaviors since suspending her campaign in June has only pissed me and other African-American Democrats off and probably sunk her chances to get the VP slot.

While Sen. Biden wasn't my favorite of the peeps rumored to be in the mix for the VP slot, if it results in victory on November 4, that's all I care about.
Posted by Monica Roberts at 4:35 PM

I was kind of hoping for Gov. Kathleen Sebelius, but I suppose she wouldn't have brought the foreign affairs credentials Sen. Biden has.

I liked Governor Sebelius as well, but she's planning to run for the open Kansas senate seat in 2010.

While Sen. Biden wasn't my favorite of the peeps rumored to be in the mix for the VP slot, if it results in victory on November 4, that's all I care about.

While I was having doubts, this dragged me right back to Earth.