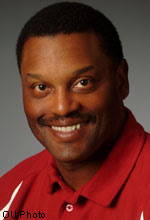 The 2008 college football season kicked off yesterday and I spent the day channel surfing between a host of games. I got to watch the surprising Michigan-Utah game and saw Florida dismantle Hawaii. But the game I was most concerned about was the season opener for my alma mater, the University of Houston. 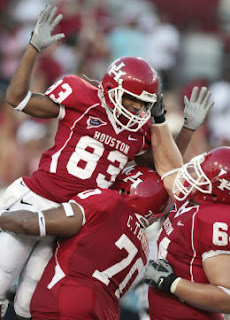 While I was there my Coogs not only dominated the old Southwest Conference under Bill Yeoman, it was a Top 20 football program. Our program is building back up to that level after being (deliberately) left out of the Big 12 when the SWC broke up.

Cougar alum Art Briles helped revive the program, leading UH to a C-USA title in 2006 but bolted for Baylor. Hopefully Kevin Sumlin can not only take the program to the next level, but help keep some of our homegrown talent in the area.

I was very happy to find out that Coach Sumlin's debut at UH head football coach went well back in H-town. They beat the Southern University Jaguars from the SWAC in their home opener at Robertson Stadium 55-3. The Jaguars will take out their frustrations on Texas Southern later this year.

Congrats Coach Sumlin. May you have a long and successful career here.
Posted by Monica Roberts at 9:52 PM