Canaries In the Civil Rights Coal Mine

Over at The Bilerico Project, Nadine Smith posted this story about a Florida state legislator and minister who thinks 'the law is supposed to discriminate sometimes'.

The constitutionally challenged idiot who said this, Rev. Darryl Rouson, I'm sorry to say shares my ethnic heritage. What's even more shocking and disgusting is that he's a Florida state legislator.

Okay, so a man who is entrusted with the sacred responsibility to make law in the state of Florida feels the law should discriminate. It is unacceptable and morally reprehensible that in light of our own tortured civil rights history in this country, when we are only 150 years removed from slavery and only 40 years removed from the end of a long and bloody fight against Jim Crow segregation that an African-American, much less an African-American legislator would even part his lips to say that.

Dr, King and everybody who put their lives on the line to end Jim Crow segregation is probably rolling over in their graves right now over that beyond asinine statement.

But Rev. Rouson's comment speaks to one of the things that I have been majorly perturbed with over the last decade. African-American ministers being facilitators for and agents of oppression instead of fulfilling the historic duty and mission of the Black church to speak truth to power and fight for the oppressed.

It has irritated me to no end the ignorance that has been displayed in some quarters of the African-American community not only of our history, but it escaping some people as Dr. King so eloquently stated, that we are in an inescapable network of mutuality.

I've always been blessed with the ability to look at an issue and see the big picture, or what peeps in the political world call 'vision'. Barack Obama is a politician that has that ability, but that's a subject for a future post. 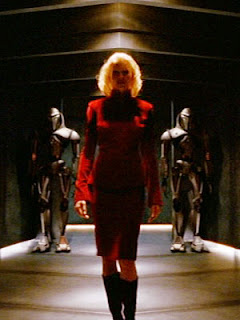 One of the things that alarmed me when I first started paying attention to the Religious Reich back in the late 80's-early 90's was their absolute hatred of the 60's Civil Rights Movement. the separation of church and state doctrine, and the Constitution. They wanted a theocracy, and the only way to accomplish it was trash the constitution. They also remember from their readings of history that Germans voted Hitler into power and the old quote that when fascism comes to America, it will be wrapped in a flag and carrying a cross.

So like the Cylons, they had a multi faceted plan to do so.

They needed an enemy to focus on, and since 'godless communism' wasn't available, it got replaced by 'The Gay Agenda'. They wanted you to believe that if we didn't start oppressing gay people, our country would collapse. Knowing that most fair minded Americans wouldn't drink that Kool-Aid, they 'scurred' and duped many of you into believing that BS. 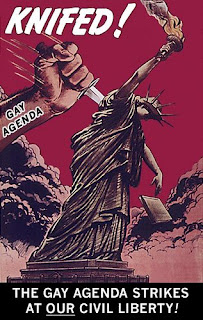 People see a videotape of a person getting roughly handled by the police during a protest and think they 'deserve it'. A person gets beat down in a police station and people shrug their shoulders because it was a transgender person taking the blows and not one of 'their' people.

In order to get people comfortable with the idea of voting to limit people's civil rights or eliminate them altogether, out come the ballot initiatives from 'concerned citizens'. There are constitutional amendments proposed with Orwellian language that state they're designed to 'protect marriage' or 'strengthen the family' but in reality they strip away not only GLBT people's rights , but the rights of straight people as well.

The sad part is that many of the folks now complaining about this didn't have any problem doing so on election day because they thought 'their' rights weren't on the chopping block. Some of them blindly followed what their pastor said in his homophobic sermon preached from his pulpit on Sunday after getting his faith-based bribe money. That sermon concluded with the admonition that voting for the latest 'Hate The Gays' constitutional Amendment or voting to repeal civil rights for GLBT people is not only your way to prove you're a God-fearing Christian, but a good American as well.

The problem with that attitude and the faith-based ignorance that feeds into this is that once civil rights are lost, it's difficult to get them back. These amendments are also being designed to have an impossibly high threshold to repeal them as well as being designed with deceptive wording when they are first proposed. 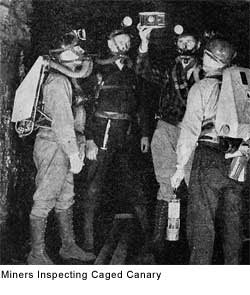 Back in the early 20th century, before the high-tech methane gas detectors were created, miners used to take a live canary into the mine and hang them in the areas where they worked. If that canary started showing visible effects, like swaying on its perch before dying, then the miners knew that the methane concentration in that area of the mine had built up to dangerous levels and they had to get out immediately.

To borrow an analogy Dr. Enoch Paige used in his speech to the Transgender Pride March back in June, we GLBT people are the canaries in the civil rights coal mine. The health of our civil rights determines the health of civil rights in our democracy in general, and right now we are swaying from the efforts of a decade of poisonous attacks on them.

We and our rights aren't dead yet, but there are plenty of warning signs the Reichers are coming after us, aided and abetted by cowardly constitutonally-challenged legislators such as Rev. Rouson and sometimes by our own allies.

We beat back an attempt here in Louisville in 2004 and won big when our Fairness Ordinance had to be reauthorized in the wake of the city-county merger. Our brothers and sisters in Montgomery County, Maryland are fighting to keep a transgender civil rights law that passed last year on a 9-0 vote. The Forces of Intolerance are using the bathroom issue as a wedge issue and trying various deceptive and deceitful tactics they will use to fight transgender rights laws elsewhere if they are successful in repealing this one.

This is a coordinated strategy that our enemies are using, and it will take a coordinated response from all sectors of it to beat it back.

It's also a fight we must win, or like the coal mine canaries, our civil rights will painfully expire right before our eyes. And to my fellow non-GLBT African-Americans, guess whose civil rights are next on the right-wing chopping block after they're done jacking with the GLBT community?

So we need y'all to step up to the plate and help some brothers and sisters out. The civil rights you save may be your own.
Posted by Monica Roberts at 12:04 PM

Monica, i could not agree with you more. The struggle for civil rights continues to be a fight for all of us. We cannot take the "this is not my fight" approach. We all have our parts to play.

I am going to keep doing what i can as a citizen of this country. At the same time i'm preparing myself for a new role that put me in a place where i can be a different voice in the world of religion.

Blackbird,
Thanks and best of luck in that new role.

It's time for African-American transwomen to take control of our own destinies, just as our biosisters have done throughout our history.