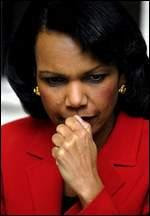 The interesting thing about Negro conservatives is that every now and then, when an issue comes up that Black America is commenting on that is strongly at variance with prevailing conservative opinion or spin, every now and then they shock us by being down with the rest of us. They'll occasionally make comments that leave us wondering if they took a look in the mirror that morning.

Such a moment happened last Thursday when Secretary of State Condoleezza Rice, who has never been a favorite of mine (I have more respect and love for her cousin Constance Rice) was asked about the Rev. Wright controversy during a wide ranging March 28 Washington Times interview.

Believe it or not Condi had this to say to the editors of the conservative Washington Times:

"The United States still has trouble dealing with race because of a national "birth defect" that denied black Americans the opportunities given to whites at the country's very founding."

"Black Americans were a founding population. Africans and Europeans came here and founded this country together — Europeans by choice and Africans in chains. That's not a very pretty reality of our founding."

"As a result, descendants of slaves did not get much of a head start, and I think you continue to see some of the effects of that."

Rice continued on to say that "America doesn't have an easy time dealing with race, and added that members of her family have "endured terrible humiliations." 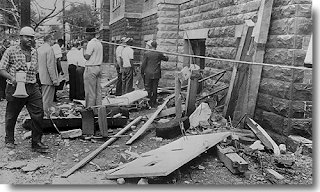 Well, well, well. Did she finally remember that she was born in Bomingham, oops Birmingham, AL and lost a classmate in the Klan orchestrated 16th Street Baptist Church bombing?

Whatever prompted her to make these comments, for once I'll have to give her some credit for honestly saying what's so freaking obvious: Rev. Wright spoke the truth about America's race problems.

It's interesting to note, however that the hysterical foaming mouth high-tech witch hunt that has continued to dog Rev. Wright has not darkened Condi's door (pardon the pun) except in Freeperland. The Freepers are in full throated racist rant mode and have turned on her like rabid dogs. I also note that the media has been strangely silent about this save for CNN discussing these comments on Friday's The Situation Room.

As I have said ad nauseum over the years, the color line predates the founding of this country and infects everything and every aspect of our society. Until we forcefully deal with it, America's original sin of slavery and racims will continue to rear its ugly head.


This post also can be found at the Bilerico Project
Posted by Monica Roberts at 11:02 PM

Condi chooses her skin color as a matter of convenience.

The Sunday after Katrina, she showed up in Mississippi for church services at a church that had blown away. She was darkly made up - very dark brown, and wearing a sober black dress.

Later that afternoon, she shows up in a mixed setting in the French Quarter. She was made up as pale as Hillary Clinton, and wearing a red suit.

That she does...which is why I have more respect for her cousin Connie Rice.