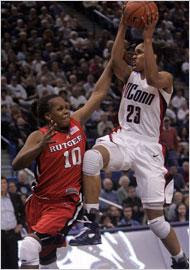 I'm a big college hoops fan, and that also includes women's games as well. I have been pleased to see the increasing amounts of quality women's college games being broadcast on TV.

So I'm starting a new tradition on TransGriot in honor of Women's History Month. I'm going to post my NCAA tournament picks for the women's tournament as well.

I'm doing better with my women's NCAA picks than I am with the guys.