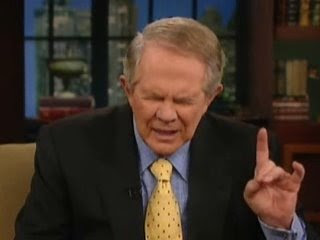 TransGriot Note: With all the faith-based Hateraid being spewed at transgender people lately by fundamentalists and the Catholic Church, I thought it was time to post this transcript from a 700 Club show. Pat Robertson weighed in on transsexuality and stated the obvious on October 5, 1999. Note the parts I have in bold print.

Letter Writer:
I'm 40 years old and have had a sex change. I've been watching your program and was wondering if God forgave me. Should I live as I am now or go back to my birth gender?


Pat Robertson:
This is a very serious question and I appreciate it. There are people who are born with various types of hormonal activity in their bodies and they feel more male than female, and more female than male. I know a plastic surgeon here, in this area who indeed does that sort of thing and, ah, to accommodate what is going on in peoples lives.

Terry Meeuwsen:
This is a very legitimate hormonal thing happening.

Pat Robertson:
Exactly. So, it is not a sin. So you don't need to feel guilty.

So you say, will God forgive me. Of course He will, He does. This isn't something that you have sinned and if you wish to get back and your 40 years old, it's not exctly too late. I know as I say, one man who can do a sex change reversal.

Terry Meeuwsen:
God is interested in what his heart, attitude is, speaking spiritually.

Pat Robertson:
God does not care what your external organs are. The question is whether you are living for God or not. Yes, He loves you. Yes, He forgives you and He understands what is going on in your body.

Any wonder that the Forces of Intolerance quickly scrubbed this transcript snippet from the 700 Club archives? Pat has since tried to distance himself from these remarks, but it's out in The Net and the gift that keeps on giving. I used that last quote in March 2001 when I testified in my home state in favor of a streamlined name change bill that TGAIN was sponsoring.

I'd like to conclude this post with a scripture from Galatians 3:28 which reads, There is neither Jew nor Greek, neither slave nor free, neither male nor female; for you are all one in Christ Jesus.
Posted by Monica Roberts at 6:23 PM