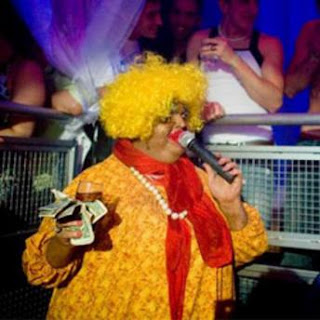 You long time TransGriot readers know I can't stand the new jack minstrel show that Chuck Knipp puts on. I've posted more than a few times and written columns about how insulting this 'act' is to me and other African-Americans gay, straight or transgender.

It seems like Chucky definitely has his water on for Jasmyne Cannick. She's been singled out by SQL defenders for the ongoing campaign protesting the SQL show. There's now a website called banshirleyqliquor.com that seeks to end this ongoing insult to Black womanhood.

First it was putting Jasmyne's private phone number and e-mail address on his website, which ended up with her receiving death threats from Chuck's fans.

This is what Jasmyne had to say about it.

So I decided, after much thought, to post the photo that Charles Knipp, aka Shirley Q. Liquor, tactlessly posted on the homepage of his website last week.

Jasmyne, I don't see it happening because Chucky wouldn't last five seconds with you.

I issued the same debate challenge to SQL defenders here in Louisville and as of yet no one has stepped up to accept it. What they did do was browbeat my former editor into cancelling my three year old column last September in the local GLBT paper by threatening to yank ads if it didn't go bye-bye.

But whether you agree with her or not, what was done to Jasmyne was disgusting, unacceptable and nekulturny. If you're wondering what the word nekulturny means, it's Russian for uncultured.

Chucky claims to love and honor Black women, but his vicious actions directed at Jasmyne Cannick and the negative portrayal of African-American women through his SQL character belie that.
Posted by Monica Roberts at 9:15 AM

Chucky went to far a long time ago. His SQL character is so obviously racist I can't believe anyone but a full KKK member could defend it. Chucky and his 'defenders are a whiny bunch racists wrapped in white male privilege. All they have done with their cowardly antics is created another anti-SQL actisvist.

Natasha,
This pissed me off. I wasn't the only victim of the 'threaten the GLBT paper advertising' stunt. I've heard this is playing out in GLBT communities all over the country.

So if they wanna play like that, time to bring down the curtain on the SQL show.

Sensitive little things aren't they? If they can successfully threaten GLBT newspapers with loss of advertising revenues they are RICH bunch of white gay's then.

You know what ticks me off just as much? The folks who write in to you and/or Jasmyne and say, "Let it go."

It's always "let it go" whenever SQL comes up or "you'll just give him more attention." Yeah, right. The people who give him attention are the ones who *pay* him for this schtick.

At the heart of this, however, is the fact that for whatever reason, the lives of authentic Black women are not good enough to be talked about and/or celebrated. It has to be filtered through a lens of white constructed reality in order for it to be palatable for the masses. And then it's not because they really want to get to know us.

When Natasha talked about white male privlege, she hit the nail right on the head; I'll add that other men (Black men in particular) have rushed to SQL's defense with the ineveitable "It doesn't matter because no one I know acts like *that.*" But that's the point of the exercise - we can laugh at those less fortunate because what the hey? It's not like *we* know anyone like *that.*

I'm sorry your column got bounced but glad you're still here in the blogsphere. I've learned a lot from you about POC trans issues and that's been important to me as a Black lesbian. Keep speaking out and speaking up. If the larger GLBT community doesn't want to listen, well, that's on them.

Chuck Knipp's act is insulting, on so many levels, to so many people, that I can't believe that anyone pays money to see it. That a gay man - a member of a presumably discriminated against minority - would deliberately
make fun of several other minorities facing discrimination (transgender people, single mothers, women in general, women of color, people with Afrocentric names, welfare recipients, etc.) is crass and defiant of belief. It might be funny in the crudest of senses, when the person has an illegal blood alcohol level, but it really isn't funny - it is tragic.

Oh, yeah:
The column Monica wrote was for "The Letter". David Vanderpohl, the editor, did not even have the decency or guts to request alternate columns, or to contact Monica to tell her that she was fired, or to even state that he didn't want the subject of SQL uttered. There was a time - David Williams (not the GOP creep who is the KY state senate majority leader)was editor then - when "The Letter" was a respected news source for the GLBT community in Louisville. Now it is nothing but ads for crappy drag shows, and very little community news - and nothing for the T community of Kentucky. I don't even bother reading it anymore.