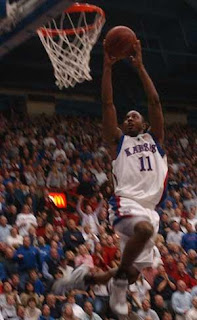 Hey TransGriot readers!
Last year I posted my NCAA tourney bracket on the blog and didn't do too badly. I picked Florida to win it all and they did.

It's a new year and a new NCAA tournament starts in a few hours. I love it except when they keep showing highlights of a last second shot from a certain 1983 NCAA championship game.

Anyway, here are my picks for this year's NCAA men's tournament. I'm still working on my NCAA women's tournament bracket and will post that tomorrow.

2008 NCAA Champion
Kansas
Posted by Monica Roberts at 8:00 AM

You forgot the Bulldogs - UGA

You left out the Bulldogs.

Interesting. I know that after the first day, my brackets are trashed like a college freshman in the infield of Churchill Downs on Derby Day.

It's okay to forget the Bulldogs. Xavier dumped them, but it was closer than the score would have indicated.

At least we can all hate Dork, er, Duke, equally. How can anyone root for a college whose most famous graduate was Richard Nixon? The only college I know that has a WBT as its mascot.

Looks like UConn is gone, too. So much for that bracket.

Don't feel bad. I had Georgia, Drake, USC, Vanderbilt, and Gonzaga advancing a few rounds apiece. So much for big chunks of my brackets. At least my Final Four is still intact.

After we replace that broken car seat of yours, we need to throw it in honor of Coach Knight.

SeaMonica,
While the Bulldogs won four games in four day to get in the tournament, I didn't feel they had enough talent to hang around longer than their opening round game