2016 CONCACAF Women's Olympic Qualifying- It's Canada And The USA To Rio!

The 2016 CONCACAF Women's Olympic Qualifying Tournament has been going on in Texas since February 10 to determine who gets the two Rio Olympic soccer tournament slots allotted to CONCACAF.

The scene has shifted to Houston for the knockout rounds of the tournament, with the semifinals being played last night at BBVA Compass Stadium. 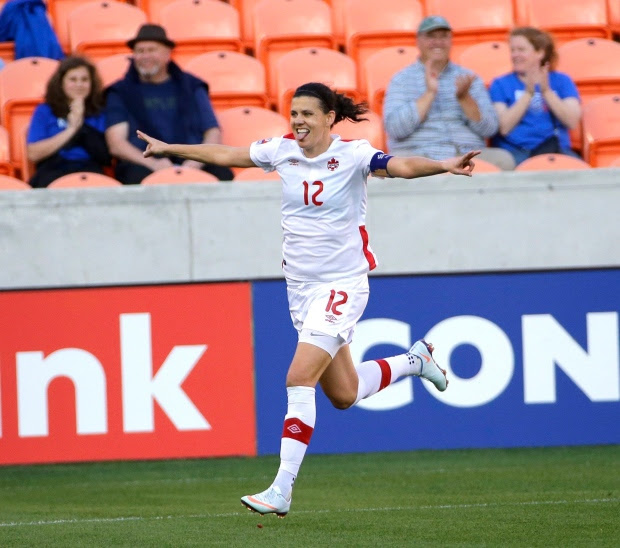 Group B winner Canada faced off against Group A runner up Costa Rica for one of the two Olympic slots, and thanks to their captain Christine Sinclair's two goals in the 17th and 51st minutes punched their ticket to Rio with a 3-1 win.

Costa Rica's Raquel Rodriguez added one from the penalty spot to cut the Canadian lead down to 2-1 in the 71st minute, but Deanne Rose scored in the 86th minute to put Canada comfortably back in front by two goals and secure their spot in the tournament finals on Sunday.

Two hours later it was the USA facing off against the surprise runners up of Group B in the Women Soca Warriors of Trinidad and Tobago, who clinched their spot in the knockout round with a 5-1 win over Guyana on February 16. 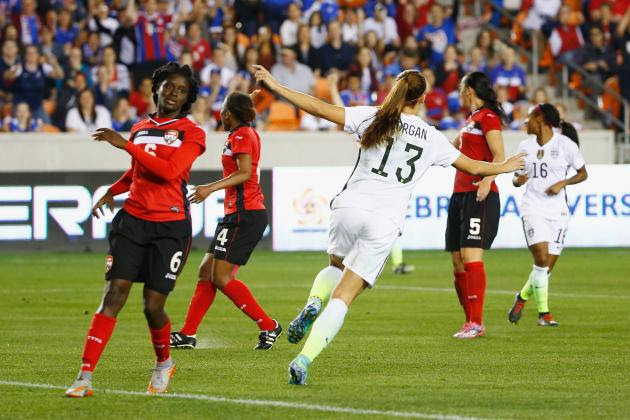 But playing Guyana and the world champion USA squad are two different tasks, and 12 minutes into the match Tobin Heath scored to put the world champs up 1-0.   Alex Morgan score the first of her three goals in the 30th minute to put the USA up 2-0, and Carli Lloyd scored in the 43rd minute to send the USA to the locker room at BBVA Compass Stadium with a 3-0 halftime lead.

Morgan completed her 3rd international hat trick with goals in the 71st and 73rd minutes to send the USA to the finals of this qualifying tournament on Sunday against Canada with the second CONCACAF Olympic qualifying spot nailed down.

It is the sixth consecutive time that the USA women's team has qualified for the Olympics, and they will be seeking their fifth straight Olympic title when they do get to Rio.

On Sunday the USA an Canada clash for the CONCACAF Qualifying tournament title in a game in which nothing is on the line but pride and a trophy.

The real fight will be starting on August 3 when the women's Olympic soccer tournament kicks off.

How are you. well i like your blog very
much and visit it regularly. i am also following your blog.

Well i have also have my own blog www.webfemulate.com and I will be
grate thankful to you if you can add my blog to your blogroll List (African-American Trans Blogs) and i will also do the same.

Please help my blog to grow, i will be thankful to you.

Nepal Base Camp Treks (P) Ltd (team guide) are not only provide you a perfect holiday tour services, also here to organize your trouble less trekking holidays in scenic green hills to icy peaks where reachable on foot.
There are hundreds of best and fantastic trekking tour operators in Nepal, offer you to choose many popular trekking destinations in high Himalayas as, Everest Base Camp Trek, Everest Chola Pass Gokyo Lake trek, Everest Gokyo Renjo la Pass Trek, Annapurna Base Camp Trek, Annapurna Circuit Thorong La Pass Trek , Upper Mustang Trek,Annapurna Nar –Phu Hidden Valley Trek, Kanchenjunga Base Camp Trek, Manaslu Circuit via Tsum Valley Trek, Langtang Valley Trek,Gosaikund Helambu Trek, Kathmandu Valley Circuit Trek and untouched tourist destinations of Ganesh Himal Camping Trek, Tawal Earthquake Area Camping Trek, Upper Dolpa Trek, Makalu Base Camp Trek and much more… as you desirable.
If you are looking for perfect trekking operator and perfect guide who take care all your responsible and looking unexpected trouble free holidays in Nepal, our professional guides, Bibek Gurung, Buddhi Tamang, Anjan Waiba, Debman Tamang and female guide Pramila Lama are our young and 10 /12 year experienced license holder in Nepal Base Camp Treks (P) Ltd.
We are fully government Registered small group trekking company in nepal and trained under the ministry of tourism sector around 10/15 years. We operate only trekking in Nepal Himalaya and small peak climbing.
You are heartily welcome to Nepal Base Camp Treks (P) Ltd. to experience your wonder trekking activities in Himalaya with our team believes "providing good service" is our motto. Our team also believes not to regret your past, not to worry about future but let's enjoy the journey with us.
We have reletive keyword to search your trek Items in Nepal
annapurna base camp trek 7 days