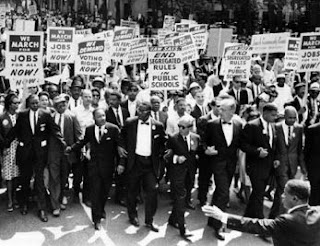 I wrote earlier this month in a post that Black music is a powerful, multi-generational, creative force.

Black music is also a powerful force for change and social consciousness as well. It's demonstrated every time someone sings the Civil Rights era theme song 'We Shall Overcome' at a protest somewhere in the world.

From Billie Holliday singing her haunting anti-lynching song 'Strange Fruit' (that you can watch a video of her performing it by clicking on it in TransGriot Video) to rappers, protest and socially conscious lyrics have been an integral part of Black music. 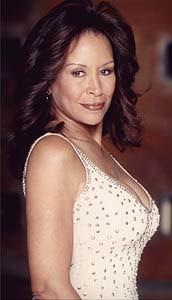 I can remember hearing Edwin Starr's 'War' and Freda Payne's 'Bring the Boys Home' on the radio. Both songs were written when the Vietnam War was raging and got frequent airplay. As the Iraq War becomes more unpopular those songs are making a comeback as well.

The struggle for civil rights and the awakening of Black pride is exemplified by James Brown's 'Say It loud I'm Black and I'm Proud' and the Impressions Curtis Mayfield penned tune 'Keep On Pushing'.

Marvin Gaye got ecological issues on Black America and the world's radar screens with 'Mercy Mercy Me The Ecology' and other socially conscious tunes. Parliament-Funkadelic's early stuff was political and you'll catch me humming a 80's era anti-war ditty called 'Bullet Proof' from time to time as well. 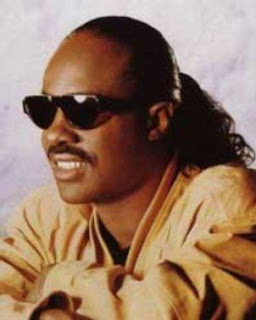 But the master of writing socially conscious songs has to be Stevie Wonder. Stevie has tackled subjects ranging from apartheid ('It's Wrong'),the push for a MLK national holiday ('Happy Birthday')to discrimination ('Cash In Your Face').

Stevie wasn't the only one writing socially conscious lyrics in the 70's. Some of the Philly International artists contributions were songs such as Harold Melvin and the Blue Notes' 'Wake Up Everybody' with Teddy Pendergrass singing lead and McFadden and Whitehead's 'Ain't No Stoppin' Us Now'. The Isley Brothers 'Fight the Power' is another anthem of mine. There's even a Village People song called 'Village People' in which it talks about the emerging gay rights movement. Janet Jackson and Prince have written some as well on various albums.

I can't sleep on the original rapper, Gil Scott-Heron. One of my favorite songs from him besides 'Johannesburg' and 'The Revolution Will Not Be Televised' is one that slams the Reagan administration on his 1981 Reflections album called 'B-Movie'. 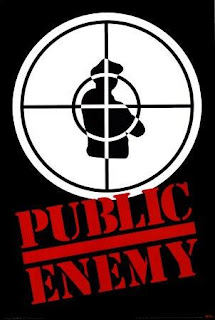 Speaking of rappers, Grandmaster Flash's 'The Message' still resonates with me and I absolutely love Public Enemy. Where do I start with them? There are just too many PE songs to choose from that fit the bill but a few of my favorites are '911 Is A Joke, 'Can't Truss It', and 'Burn Hollywood Burn'. I like Queen Latifah's 'U-N-I-T-Y' which commented on the negative language used to describe women a decade before Don Imus got sacked for using one of those terms.

You don't have to be a multi-platinum selling artist to create a song that grabs people's attention either. 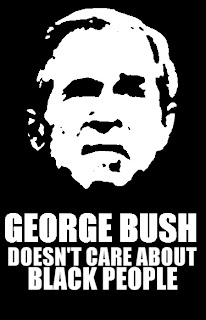 Houston-based rapper The Legendary KO penned a song that symbolized the anger of African-Americans over the Hurricane Katrina disaster and the glacial response to it. He fittingly remixed Kanye West's 'Golddigger' and titled it 'George Bush Doesn't Care About Black People'. The song ended up getting downloaded by 2.5 million people worldwide.

So when it comes to getting Black America's message out, if the mainstream media won't do it, you can bet that you'll hear it on one of our R&B stations. It'll be the song we'll be dancing to with a slammin' track and socially conscious lyrics.
Posted by Monica Roberts at 4:39 AM