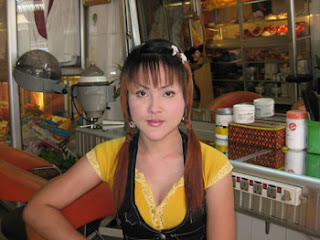 From an early age Leang Sothea knew she was different, but since having a sex-change operation in 2006 she hasn't looked back

BASED on the prediction of the midwife, Leang Sothea's mother's was
certain the child would be a girl. Before she gave birth, she even
started sewing girl's clothing for her new baby.

Leang Sothea was not born a girl, but the midwife wasn't exactly wrong either.

Feeling like a woman combined with the heartbreak of unrequited love prompted 26-year-old Leang Sothea, professionally known as "Popi", to undergo a sex-change operation in 2006, becoming one of the few transsexuals in Cambodia.

While Popi enjoys reading fashion catalogues, "hair decor" and excursions to the seaside, she is not just another pretty face. From an early age, she knew she was different. By the age of eight, she knew she was attracted to boys. By 16, she started wearing women's clothing and cosmetics for the first time.

She told the Post that she felt an affinity to being female from birth. "It is my inclination by nature," she said.

As a transgendered woman in Cambodia, her life has often been filled with discrimination and misunderstanding.

The reactions from the public and her family - especially early on - were not always positive.

"I've been discriminated against and faced the public's disgust. The first time my parents realised that I wanted to be a girl, they were furious at me, but time gradually reduced their fury. Initially though, I was in a real dilemma; men didn't like me, and women didn't like me."

Crowned Cambodia's first transvestite beauty queen in 2001, Popi took the opportunity of her nationally televised victory to speak out for the rights of transgender people.

Beating out 30 other transvestites was a real turning point for Popi. She told the Post shortly after her 2001 victory, "Before people looked down on me, now wherever I go people like me."

The win even turned into a source of pride for her family. "Now my parents are happy that I won the contest. They are proud," Popi said in 2001.

Organised by the National Television of Cambodia, the pageant was both the first and last of its kind, making Popi the reigning Miss Gay Cambodia to this day. Popi explained this was due to the event being "severely criticised by the public for seriously affecting Khmer traditions and customs".

The beauty queen contest was surely influenced by similar competitions on Thai television, but "katoey" in Cambodia is nothing new.

One scholar told the Post that the Thai word for "transvestite" might have originated in the Khmer word "katoey," which used to describe both hermaphrodites and transvestites.

Back in 2001, she told the Post that she did not want to have a sex-change operation.

What changed her mind?

Even after being crowned and receiving the 500,000 riel grand prize, she faced relationship problems.

"I was really heartbroken, because my boyfriends always walked out on me. I had about 10 boyfriends, one after another, but they always left me." She felt she needed to change her sex to be more comfortable in her relationships.

Popi's physical transformation to the female gender did not come all at once.

"At first, I only had my breasts done in 2004. I decided to have a breast surgery in Phnom Penh which cost me about US$2,000. At the time, my friend urged me to have my sex organ transformed. I considered it for a week before deciding to do it," she said.

In late 2006, she finally went under the knife in Bangkok.

In total, the operation cost her US$10,000, and she had to go without sex for four months until she fully healed, referring to this time as her "diet of sexual affairs".

But when asked whether she has any regrets, she replied without hesitation, "No, I am very satisfied with my current body. It was expensive, but it was worth it. Before, I was often discriminated against, and some people even expressed disgust with me."

Regarding her relationship situation, she told the Post, "Since I changed my organ, I only have two boyfriends, but now I leave them, instead of them walking out on me. I really love my current self. I can have whatever the girls have, except a baby."

While Popi is quick to admit that her life has at times been an uphill battle, she feels that she has now triumphed over adversity. Currently, Popi works as beautician and an actress.

She claims to have been in around 20 movies, often playing a gay person or a maid. Despite some career success and a newfound confidence in her relationships, she has yet to achieve all her goals.

"In the future, I would like to a marry a man, and open my own beauty salon in Phnom Penh."

I first read the title as "Transsexual Triumphs Over Gender Diversity" which seemed a little odd.

Thanks for posting this, it is always great to hear peoples stories.