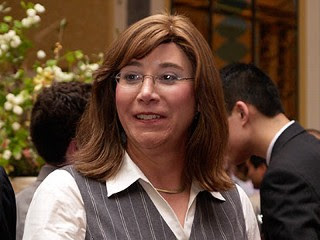 TransGriot Note; More good news to report on. Diane Schroer won her potentially groundbreaking federal lawsuit against the Library of Congress. Say thank you to the ACLU by dropping a little donation in their laps.

WASHINGTON - Today a federal judge ruled that the Library of Congress illegally discriminated against a Special Forces veteran when she was denied a job after announcing her intention to transition from male to female. In a groundbreaking decision, the court ruled that discriminating against someone for changing genders is sex discrimination under federal law.

"It is especially gratifying that the court has ruled that discriminating against someone for transitioning is illegal," said Diane Schroer, the plaintiff in the case. "I knew all along that the 25 years of experience I gained defending our country didn't disappear when I transitioned, so it was hard to understand why I was being turned down for a job doing what I do best just because I'm transgender. It is tremendously gratifying to have your faith in this country, and what is fundamentally right and fair, be reaffirmed."

In reaching its decision, the court ruled: "The evidence established that the Library was enthusiastic about hiring David Schroer – until she disclosed her transsexuality. The Library revoked the offer when it learned that a man named David intended to become, legally, culturally, and physically, a woman named Diane. This was discrimination 'because of . . . sex.'"

The court compares the discrimination faced by Schroer to religious-based discrimination, saying, "Imagine that an employee is fired because she converts from Christianity to Judaism. Imagine too that her employer testified that he harbors no bias toward either Christians or Jews but only 'converts.' That would be a clear case of discrimination 'because of religion.' No court would take seriously the notion that 'converts' are not covered by the statute."

"The court got it exactly right, sending a loud and clear message to employers everywhere: if you fire or refused to hire someone for transitioning, you are guilty of sex discrimination and may well find yourself liable," said Sharon McGowan, one of the ACLU LGBT Project staff attorneys who tried the case.

The court also ruled that the Library was guilty of sex stereotyping against Schroer because she failed to live up to traditional notions of what is male or female.

The ACLU filed the lawsuit against the Library of Congress on June 2, 2005. After retiring from the military, Schroer, who had been hand-picked to head up a classified national security operation while serving as a Special Forces officer, applied for a position with the Library of Congress as the senior terrorism research analyst. Soon thereafter she was offered the job, which she accepted immediately. Prior to starting work, Schroer took her future boss to lunch to explain that she was in the process of transitioning and thought it would be easier for everyone if she simply started work presenting as female. The following day, Schroer received a call from her future boss rescinding the offer, telling her that she wasn't a "good fit" for the Library of Congress.

"I very much hope that this ruling will help to eliminate the all-too-pervasive discrimination against gender non-conforming people in all areas. I hope too, that employers, family members, friends and co-workers will begin to understand variations in gender identity from a basis of knowledge and not fear," added Schroer.

A copy of the decision, the complaint, a video, a bio and photographs of Diane Schroer are available at: www.aclu.org/caseprofiles
Posted by Monica Roberts at 1:31 AM

This decision is awesome, both for what it is and for how the judge worded it.

Congrats to Diane Schroer! And to all of us.

Veronique,
That it is. It probably becomes the legal hammer we need to overturn Ulane v Eastern Airlines

And whoever said that part about "converts" - was it the judge? - hit the nail on the head.

All of our activism is sometimes worth it...

Oliver,
It's all about the t-kids. We may not see the benefits of it, but they will.


That's what motivates me to do what I do.