Washington Has Three African-American Head Coaches-What's Wrong With The Rest Of The NCAA? 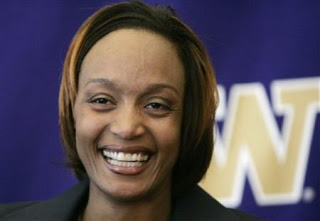 When 34 year old Salisbury, MD native Tia Jackson was hired by the University of Washington on April 7 it reunited her with an old friend from her Stanford University days in Ty Willingham. In addition to making the former Duke assistant coach just the third head coach in the 22 year history of the program it marked another historic milestone. 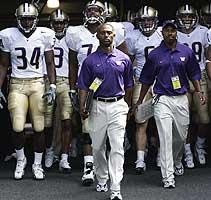 The University of Washington became the first NCAA institution to have three African-American coaches at the helm of the major sports of football and basketball at the same time. Willingham runs the football program and UW alum Lorenzo Romar is the men's head basketball coach.

"No question, it's unprecedented," Willingham said. "But in Tia, the number one thing is we have an outstanding person with an unbelievable passion.

He's not biased. Jackson has been well groomed for her first head coaching job. In addition to being what some people in the women's game consider a top notch recruiter Tia played five years for her mentor C. Vivian Stringer at Iowa and was on her 1993 Final Four squad.

"It warms my heart to know she has been given this opportunity, and I am extremely proud of her," Stringer said. 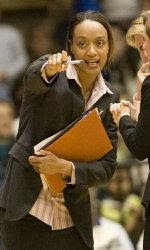 After her graduation from Iowa in 1995 she was drafted by the Phoenix Mercury during the WNBA's inaugural season in 1997 and played on Cheryl Miller's team that reached the WNBA championship in 1998. As a Stanford assistant Jackson learned strategies and how to meticulously break down film from 1996 Olympic team coach Tara VanDerveer.

She's also been an assistant coach at Virginia Commonwealth, UCLA and under Gail Goestenkors, who just left Duke to take the University of Texas job in the wake of Jody Conradt's retirement.

"Tia is destined to be a superstar," Goestenkors said. "She has it all. She's outgoing, she's an incredible recruiter and she's great with people. ... She's an impact coach. And Washington is one fortunate university."

Jackson inherits a Huskies team that went 18-12 last season, finished fourth in the Pac-10 and was routed by Iowa State in the first round of the NCAA tournament. Washington's incoming class is considered among the nation's best and Husky fans can't wait for next season to tip off. 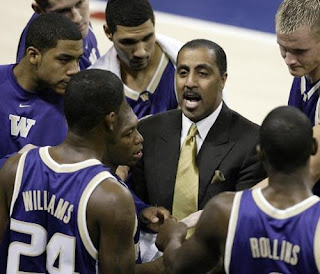 *There are no Black women head coaches in most of the nation’s premier conferences, such as the Big Ten Conference and the Big 12 Conference.

"The Atlantic Coast Conference has more Black head coaches than White ones but there are no women among them.

*The Pacific 10 Conference (Jackson) and the Big East Conference (Stringer) each have only one Black head coach.

*With the recent departures of Pokey Chapman at Louisiana State University and Carolyn Peck at the University of Florida, the Southeastern Conference has no Black women head coaches.

The rub is that 40% of the players at NCAA Division I institutions are African-American. The numbers have to get better and it may take something similar to the NFL's Rooney Rule to accomplish that.
Posted by Monica Roberts at 8:35 PM